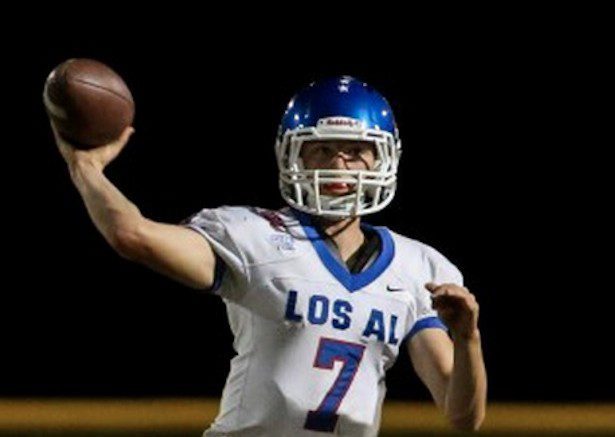 It will be interesting to see how #22 Los Al rebounds from last week’s Hail Mary pass loss to La Habra.  This week, the Griffins will face #23 San Juan Hills Friday night.

Los Al, which brings a 2-1 record into the game, has been led this season by senior quarterback Jack Telenko, who’s amassed nearly 1,000 in total offense in three games.  Telenko has thrown for 844 yards and rushed for 131 yards.  The 6-2, 203 pound senior has completed over 60% of his passes (53-of-87) with six touchdown passes and three interceptions.  Telenko is averaging over seven yards per carry on the ground with three TD’s.

Friday night’s game will be a good showcase for Telenko, who is getting interest from Fresno State, Montana and San Jose State, against the San Juan Hills‘ (4-0) quarterback Patrick O’Brien, an Elite 11 quarterback, who’s give his verbal to Nebraska.  Earlier this year, Telenko finished third at the first-ever Rivals Quarterback Challenge in Los Angeles.

You watch Telenko’s 2015 highlights below.