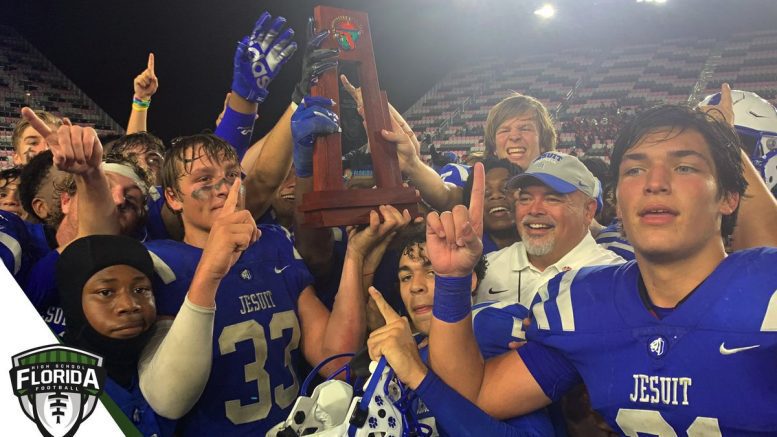 For a while, it looked like the state champion-less streak would continue for Jesuit, which hadn’t won a state title since 1968. In the 6A title game, Jesuit which in the next-to-last High School Football America 100, powered by NFL Play Football, was ranked No. 10, trailed Pine Forest heading into the fourth quarter.

Pine Forest appeared ready to close the door on Jesuit by going for a touchdown on fourth down at the 1-yard line, but the Tigers’ defense was equal to the task.

Huge stop by Jesuit on 4th and 1 for Pine Forest at the 1 yard line. No points for the Eagles. #flhsfb pic.twitter.com/bZUmAZdN1J

It was the first time in the fourth quarter that Jesuit was stop Pine Forest inside the 10.

Jesuit would get its game-winning score Luke Knight connected with Jaydn Girard to make it 33-29. A successful two-point conversion made the final 35-29.

Luke Knight to Jaydn Girard for a 7 yard TD pass and the Tigers retake the lead here with 37 seconds left in the game! #flhsfb @avillamarzo @Biggamebobby @HSFBamerica pic.twitter.com/sPw0qNRwsY

No. 30 Venice captures Florida 7A title by beating No. 89 Bartram Trail