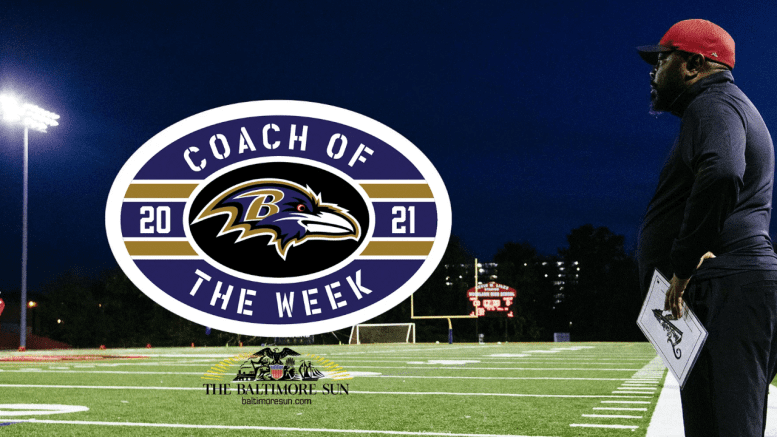 The following is from the Baltimore Ravens

Justin Martinek, varsity head football coach of the North Harford Hawks (Pylesville, Md.), has been named the Ravens High School Coach of the Week. Now in its 25th year of existence, Martinek is the ninth recipient of the award in 2021.

North Harford’s defensive unit held the Cougars scoreless in the second half, and in the fourth quarter, Smith added a 10-yard rushing touchdown for the Hawks to secure the victory.

Martinek, a 2005 North Harford alum, is in his third year leading the Harford County program.

“Heading into the playoffs with a win like this – against your rival, who was 8-0 – has added some motivation to the team,” Martinek stated. “We came out ready to play last Thursday. We were ready to go, and we were excited to play Fallston.”

North Harford hosts the North Caroline Bulldogs (Ridgely, Md.) this Friday (11/5) at 7 p.m. The matchup opens play in the Maryland Public Secondary Schools Athletic Association state football tournament for both schools in the 2A East Region.

Throughout this season, the Ravens will honor 10 high school coaches who have made a significant impact on their student-athletes. Each Coach of the Week winner will receive a $2,000 donation to their school’s football program and will be invited to the Ravens-Rams game (1/2/22) at M&T Bank Stadium for an opportunity to be named the Ravens High School Coach of the Year.

This initiative is just one piece of Ravens RISE, the team’s football outreach program presented by MedStar Sports Medicine. Ravens RISE impacts a range of area football players from youth to high school, providing them with a year-round opportunity to “Play Like A Raven” through clinics, tournaments, grants, ticket donations and exclusive opportunities to play at M&T Bank Stadium and interact with Ravens players and coaches.