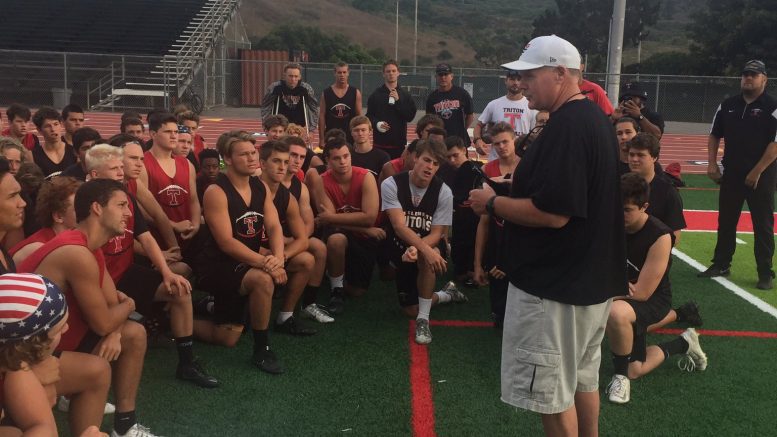 San Clemente High School (California) football players got a taste of the NFL Wednesday morning.  Kansas City Chiefs‘ head coach Andy Reid stopped by and spoke to the team before its morning workout.

Great day to be a Triton with a visit from @Chiefs Head Coach Andy Reid. A proud resident of our great community. We are #onetownoneteam pic.twitter.com/OleIrcsaec

Reid, who owns a beach home in San Clemente, spent nearly the entire practice with the Tritons’ players and coaching staff Wednesday.

“It was very cool for our kids,” said San Clemente head coach Jaime Ortiz, who led the school to a CIF Division I-A state championship last season. “Coach Reid actually came to a practice the other week, but nobody knew he was here.  He just sat in the stands and watched.  Today, was just fantastic for all of the program. We’re happy to have him as a member of our proud community.”

San Clemente has produced six NFL players, including current Green Bay Packers’ offensive tackle Kyle Murphy, who is entering his second season, offensive guard Sean Harlow, who is a rookie with the Atlanta Falcons after being drafted in the fourth round in the 2017 NFL Draft and quarterback Travis Wilson, who will be in camp with the Los Angeles Rams.

Who knows, maybe Reid was stopping by to get the “skinny” on the Tritons next NFL player — USC quarterback Sam Darnold, who is still closely connected with his alma mater.