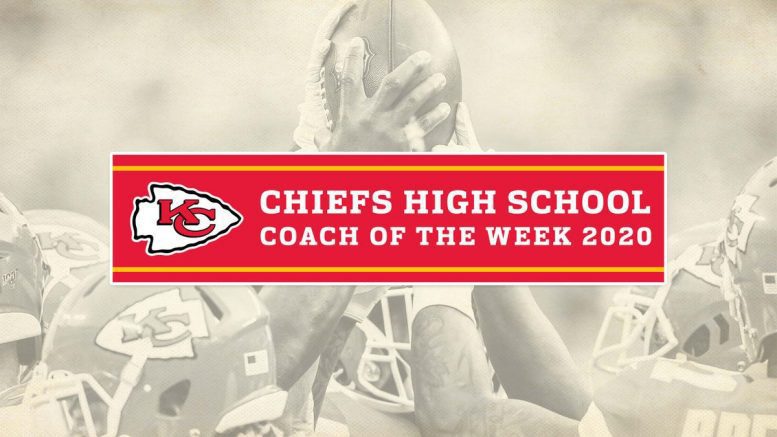 The Kansas City Chiefs have announced their Coach of the Week honors for the first week of the 2020 season. The awards go to Liberty High School (Missouri) coach Chad Frigon and Lansing High School (Kansas) coach Dylan Brown.

As a result of this honor, both schools will receive a $500 player health and safety grant from the Hunt Family Foundation. Additionally, both coaches will be presented congratulatory footballs autographed by Chiefs Head Coach Andy Reid and a certificate recognizing their selection. Both coaches are now qualified for the Eric Driskell Coach of the Year Award, which will be voted on later this fall. The Eric Driskell Coach of the Year Award is selected by a panel comprised of the Missouri and Kansas Boards from the Greater Kansas City Football Coaches Association.

Liberty is off to a 3-0 start to the season with wins over Blue Springs, Liberty North and Lee’s Summit North. This past week, the Blue Jays trailed the Broncos 35-21 heading into the fourth quarter only to rally for a 38-35 win.

“I am so honored to receive this award on behalf of our staff and players,” Frigon said. “Throughout the unexpected and trying times leading into this season our players adjusted and stayed positive allowing them to get off to a good start this fall. I would also like to thank Liberty High School and the Liberty community for making this a great place to teach and coach!”

Lansing has opened the season with two straight wins. The Lions defeated Lincoln College Prep 26-7 and then followed that with a 12-7 win over Piper.

“We at Lansing are humbled and honored to receive this award from the Chiefs,” Brown said. “This is truly an award for the players and the entire coaching staff and the work they have put in since June 1st ’til now. It’s a great honor to be recognized for our efforts that lead to our performance. Thank you very much!”

In its 24th season, the 2020 High School Coach of the Week is a joint initiative of the Kansas City Chiefs and the National Football League. This program is designed to recognize and reward Kansas City area high school coaches for superior performance on a weekly basis while honoring individuals who are shaping today’s youth and tomorrow’s leaders.

The Kansas City Chiefs partner with PrepsKC to select Coaches of the Week from Missouri and Kansas each week. PrepsKC is the only complete multimedia coverage of high school football in the Kansas City Metro. For the last 11 years it has combined a dynamic web site, weekly magazine and comprehensive weekly radio show. More information about PrepsKC, including scores, schedules and coverage can be found at www.prepskc.com.

Follow what the Chiefs are doing in the community