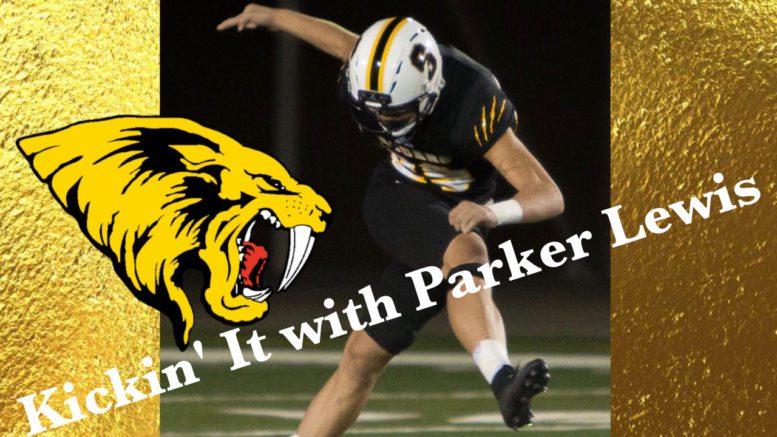 The spring season at Saguaro High School was a huge success with 86 colleges showing up on our campus. It’s been very exciting seeing the offers coming in for my teammates. We have a total of eighteen players who have been offered college scholarships to this point.

Spring ball lasted for three weeks with practices Monday through Thursday for two and a half hours each day. I focused on being ready to kick daily in prime time from 4:30 to 5:30 pm as college coaches came through. My specialist group and I were “on” during this period of time, showing great improvement throughout the spring.  At the end of the three weeks, we wrapped it up with our spring game.

I had a fun role of being the full time kicker for both units in the spring game. To make the game a little more interesting, Coach (Jason) Mohns gave each unit the option to have me kick a field goal from 55 yards for seven points, which gave me the chance to make a real impact on the outcome.

Check out @ParkerLewi of @saguarofootball, who writes a great blog for us, boom a 55 yd FG at Friday’s spring game. Parker is one of the top K/P in Class of 2020. pic.twitter.com/fTPCrwAuC5

Getting some work in before my college camps start🏈🙌🏻 #SagU pic.twitter.com/2MofrP82JB

I had great showings at my first two college camps, which were UCLA and Oklahoma State.

UCLA was my first stop on my college camp list. It was very cool to see their brand new facilities and how their new coaching staff ran the camp compared to last year. They had over 300 players at the camp. Out of that group, the staff took about 20-25 kids that they considered the top recruits for individual measurements such as wingspan, hand size, height, weight and knee & wrist circumference.

I competed very well with all of my kicking and punting skills being at their best, which led to me being named camp champion!

Awesome time at UCLA 🐻💙💛💙💛 Blessed to be named camp champion!! Thanks for the great camp @CoachRoyM #8clap pic.twitter.com/XkfsCTq9cL

Then it was off to Stillwater, Oklahoma to visit Oklahoma State. I was so impressed with the school from their coaching staff to their facilities, which were unbelievable.  It was a really cool college town.

Everything from the weight room to the team meeting rooms to the locker rooms were top notch.  All were located in the stadium facility.

I won the punt competition with a 59 yard, 5.0 hang time kick. I also charted very well in both the kickoff and field goal phases. I was the top charting specialist in KO.

My camp tour continues with Oregon, Stanford and USC in the next two weeks. The hard work never ends with the end goal of impressing and catching a college coach’s eye.

Getting Ready for spring ball

Getting Ready for Underclassman Challenge

Welcome to My Blog

Editor’s Note: Parker Lewis is a Class of 2020 Kicker/Punter at Saguaro High School in Arizona. Kohl’s Kicking Camps has him listed as a 5-star K/P.