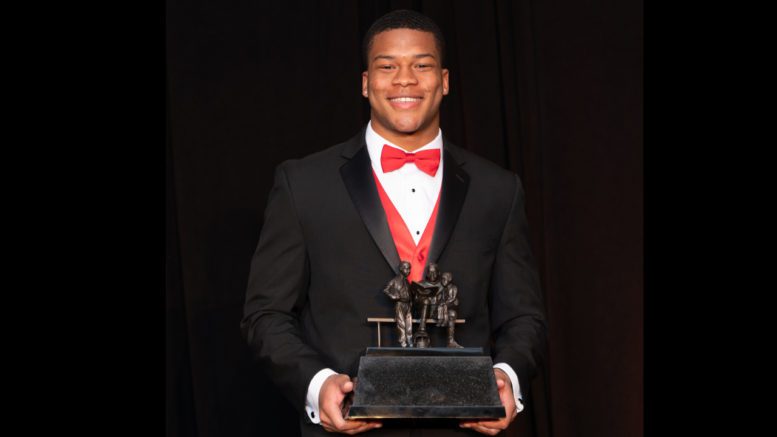 Photo courtesy of the National Alliance of African American Athletes

St. John Bosco linebacker Kourt Williams, who is already enrolled at Ohio State, is the winner of the 2020 Franklin D. Watkins Memorial Award presented by the National Alliance of African America Athletes. Williams, along with the other five finalists for the award, was honored Saturday night at the organization’s annual gala.

At St. John Bosco, Williams graduated with a 3.8 grade-point average. He volunteered at the St. John Bosco Sports Camp, as a Los Angeles Unified Literacy Coach, with the Los Angeles Community Service Project and with the Faithful Central Bible Church. On the football field, Williams was the Long Beach Defensive Player of the Year and a member of the Press-Telegram Dream Team. He was a Butkus Award nominee and was named first-team all-state.

“All six members of the Watkins Class of 2020 are amazing young men. I know how hard it was for our selection committee to choose this year’s Standard Bearer,” said J. Everette Pearsall, executive director of The Alliance. “Kourt Williams II is very impressive. Not only is Kourt a great football player, but he excelled in the classroom and was very giving of himself in the community, As this year’s Watkins Award Standard Bearer, we know that Kourt will continue to lead by example.”

Below are this year’s finalists, who were selected based on their unweighted grade-point average, personal statements, extracurricular activities, community service and letters of recommendation. Each student-athlete’s summary is provided by the National Alliance of African American Athletes.

A defensive tackle who graduated high school early and enrolled at the University of Texas, Vernon Broughton was a four-year member of the honor roll and a member of the National Honor Society. He had perfect school attendance in 2019 and was an active volunteer at sports camps and with the homeless. He participated in the Clean Up Ministry, was a member of the Community Youth Leadership Program and was the Houston Class Act Awardee for Character. On the field, he was an All-American and two-time All-District honoree and played in the Under Armour All-America Game. As a senior, had 36 tackles, 10 tackles for loss, three sacks, two forced fumbles and recovered two fumbles. He had a 4.1 GPA.

A defensive lineman who will play for the University of South Carolina, Terrell “Tonka” Hemingway is a member of the National Honor Society, the Math Honor Society, the Social Studies Honor Society and the English Honor Society. He was a South Carolina Academic All-American and a member of the Youth Leadership Academy and Chamber of Commerce Leadership Academy. He volunteered with Conway Football Parks and Recreation and Shepherds Table and tutored and mentored middle and elementary school students. On the field, as a senior he had 92 tackles, 24 tackles for loss, was named first-team all-state and played in the Shrine Bowl. Also an all-state basketball player and member of the Conway High baseball team. He has a 4.4 GPA.

A defensive lineman who graduated high school early and enrolled at Duke University, Michael Reese is a recipient of the Nashville All Region Academic Award and the Hume Academic Award. He volunteers with Best Buddies, Read Across America and Nashville Area Youth Football. On the field, he compiled 85 tackles, 25 tackles for loss and 11 sacks over his last two seasons. He was a three-time all-region honoree, two-time all-city selection and two-time region defensive player of the year. He has a 3.8 GPA.

A linebacker who will play for Ohio State University, Cody Simon is a member of the National Honor Society and the Spanish National Honor Society. He volunteers with the Jersey Boys and Girls Club and the Ebony Club. On the field, he finished his high school career with 229 tackles, 11 sacks, five interceptions and six non-offensive touchdowns. He was named all-region and all-state and played in the All-American Bowl. He has a 3.9 GPA.

A safety who graduated high school early and enrolled at Auburn University, Christopher Thompson Jr. was a member of the Fellowship for Christian Athletes, served as a Dallas Ambassador and was named Dallas Academic All State. He volunteered as a Dallas area youth mentor, the Dallas Food Pantry and as a youth basketball coach. He also was a member of the Duncanville Math Leadership Program. On the field, he led his team to consecutive appearances in the Texas 6A championship game, was ranked the No. 2 safety in the class of 2020, was a finalist for the Tom Landry Player of the Year and played in the Under Armour All America Game. He has a 3.9 GPA.

A safety who graduated high school early and enrolled at Ohio State University, Kourt Williams IIvolunteered at the St. John Bosco Sports Camp, as a Los Angeles Unified Literacy Coach, with the Los Angeles Community Service Project and with the Faithful Central Bible Church. On the field, he was the Long Beach Defensive Player of the Year and a member of the Press-Telegram Dream Team. He was MVP of the Nike Opening, a Butkus Award nominee, first-team All-State and a finalist for the All-American Bowl Man of the Year. He has a 3.8 GPA.

St. John Bosco (California) moves to No. 1 in the High School Football America 100