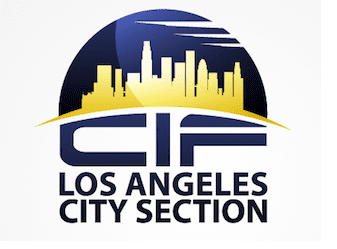 In Wilmington, Narbonne (9-0, 4-0 Marine), ranked #5 in the High School Football America Southern California Top 25 and California Top 25, can claim the Marine League title outright with a win over Banning (8-1, 3-1 Marine).  Narbonne, which is the defending CIF Division I-A champ, is on a 22-game win streak

Sylmar has won the last two leagues titles, while the last team to finish ahead of the Spartans was San Fernando, which won the 2013 league title, finishing a perfect 15-0 overall.

If this rivalry needs any more energy, San Fernando Robert Garcia can point to last year’s 63-7 loss to Sylmar.

The West Valley title is on-the-line when El Camino Real squares-off with Granada Hills.  El Camino Real will win the title with a win.  Otherwise, we could have a three-way tie if Birmingham beats Cleveland.

The West League title comes-down to Friday night’s Venice–Palisades game.  Venice leads the league with a 4-0 mark.  A win by Palisades could create tri-champs with a win and a Westchester victory over Fairfax.

Garfield has already captured the Eastern League title, however, Bulldogs still have a big game as it plays its rivalry game against Roosevelt in the East LA Classic.  Garfield brings a 6-3 record into the contest, while Roosevelt is 1-8.

Jefferson is the Exposition League champ and is on its bye week, while View Park captured the Metro League with a 58-14 win over Mendez Thursday night.

All of the other current league leaders control their destiny. Hollywood will win the Central League by beating Bernstein. Hawkins, ranked #25 in the latest High School Football America Southern California Top 25, will be Coliseum League champs if it beats Manual Arts. If Grant beats North Hollywood, it will win the East Valley crown. Lincoln wins Northern League with a win over Torres Friday night.