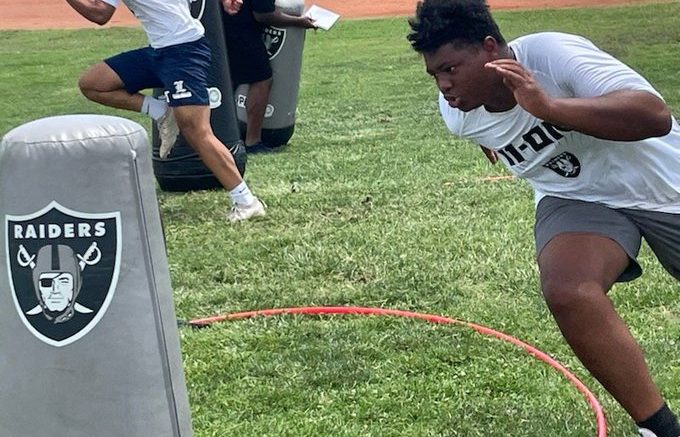 The following is a news release from the Las Vegas Raiders

As part of their ongoing commitment to the community and to youth football, the Las Vegas Raiders conducted the Nike 11-On event at Valley High School in Las Vegas at which around 600 Southern Nevada boys high school football players at all positions partook in on and off-the-field team-building activities.

Sixteen Las Vegas area high school teams participated in the Nike 11-On, a scholastic-based, team-oriented, character-building program. The one-day curriculum kicked off with Raiders Alumni Ike Ekejiuba and Jay Schroeder speaking to the student-athletes about character development, film study, nutrition as well as strength and conditioning in the morning, followed by on-field sessions.

The Raiders held the inaugural Nike 11-On event at Clark High School in Las Vegas in 2019, where over 500 Southern Nevada boys participated. Raiders Alumnus Mervyn Fernandez was among the former NFL players who addressed the student-athletes during the character development phase. The NFL and Nike brought 11-On to 16 NFL clubs including the Raiders two years ago and has since expanded to all 32 clubs.

The NFL describes Nike 11-On as “a unique endeavor that focuses on team play over individual recognition and provides development for all 11 athletes on both sides of the ball. The 11-On initiative supports scholastic high school football team competition that focuses on building transferable life skills while also creating an alternative to individual all-star formats.”

The Raiders opened Allegiant Stadium to Southern Nevada high school football teams that were selected by the Clark County School District for Spring practices in late April. The nine teams each had two hours to utilize Allegiant Stadium for their individual sessions and inter squad scrimmages.

Raiders 11-ON 7on 7 Tournament DPAC Football highlights 🔥🔥🔥
DPAC Football on the RISE! pic.twitter.com/1poqi87QtJ

The Raiders also recently partnered with the Southern Nevada Flag Football Coaches Association and Allegiant to host the Southern Nevada High School Girls Flag Football All-Star Game. Prior to the game, the girls took part in a combine event which served as a showcase to perform physical and mental tests in the hopes of attracting the attention of college recruiters.

Thanks to the @NFL @Raiders for hosting the #11on event! We had a great time competing all afternoon! The wildcats got better today! Goooo catss!!!