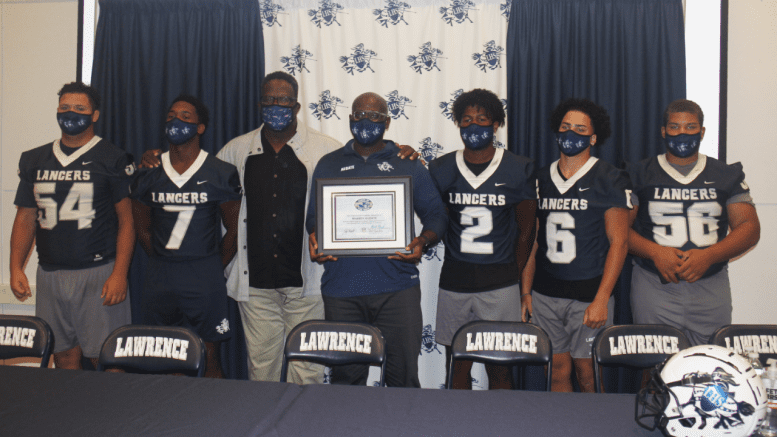 Audate, currently in his fourth year as head coach of the Lawrence High School football team, led the Lancers to their first win over Andover High since 1984 on Saturday afternoon to improve to 3-0 on the season. Sophomore quarterback Jayden Abreu threw for 202 yards and connected with senior receiver Joenel Figueroa twice in the end zone to take down the Golden Warriors in Andover.

Coach Audate had his team ready to go from the opening kickoff as Abreu threw a perfect pass to Figueroa on the third play of the game for a 75-yard touchdown. Long carries from junior running back Jadiel Gomez and clutch plays by the Lancer defense helped Lawrence grind out the road upset.

Patriots, College, and Pro Football Hall of Fame linebacker Andre Tippett, now the team’s Executive Director of Community Affairs, met with the Lawrence captains and coaching staff Tuesday morning to present the football program with a $1,000 donation on behalf of the Patriots Foundation, in honor of Coach Audate. The visit and check presentation will be featured on the Patriots weekly television show, “Patriots All Access,” which airs on Friday night at 7 p.m. on WBZ-TV in Boston and will be available immediately after on Patriots.com.

“Coach Audate had the boys ready to go right out of the gate on Saturday,” said Tippett. “Leading the Lancers to a spirited and historic victory over Andover, Coach Audate was an easy choice for this week’s Patriots Coach of the Week honor.”

For the 11th straight year, the Patriots will also be accepting nominations for High School Coach of the Week honors. Those who wish to nominate a high school football coach in New England who leads a team to an exceptional weekly performance or reaches a personal career milestone is encouraged to send submissions to[email protected]. All nominations must be submitted following a team’s Friday night or Saturday afternoon game to be considered for that week’s Coach of the Week award.

The Lawrence Lancers will look to keep their perfect season alive as they face off against Xaverian Brothers at 1 p.m. on Saturday, October 2.