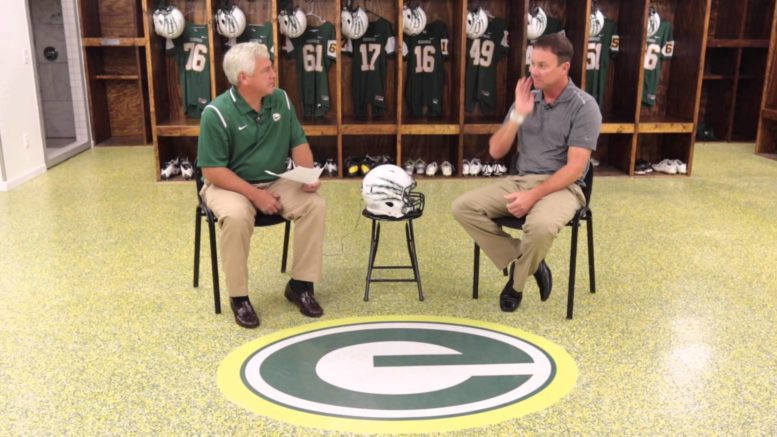 Bobby Carr has (right) resigned as the head coach at Edgewood Academy. Photo from YouTube.com

Serving as the lawyer for several dozen families of players seeking transfers from Edgewood following Carr’s abrupt departure, Mickey McDermott accused the school’s board of trustees of forcing the coach’s resignation because they did not support his willingness to play black and Hispanic athletes, according to a WSFA-TV report.

“I would certainly agree that race is a major motivating factor in the forced ouster of Coach Carr,” McDermott told the local television news station on Thursday. “Carr can speak for himself and I can certainly understand his silence given whatever agreement he reached with the school so he can move on to another career.”

When Carr resigned last week after 15 seasons, including a current streak of 71 wins and six consecutive state titles, he offered little explanation beyond a desire to seek a new challenge.

“I love Edgewood and I’m thankful for the opportunity they’ve given me the last 15 years, I just think it’s time to do something else,” Carr, who owned a 162-25 record at Edgewood, told the Montgomery Advertiser. “The analogy I gave my guys, I feel like the last four or five years, I’ve walked in, pushed a button and the machine runs. And our kids are the machine. They get it, they understand what it takes to be the last one standing at the end of the day. It’s time to go build another machine.”

Carr has also coached Edgewood’s baseball program to seven straight championships in Alabama’s independent league. McDermott’s public comments came on the heels of Edgewood headmaster Clint Welch telling reporters Carr was not forced out and resigned on his terms, and the lawyer now believes more families will seek transfers after Welch’s characterization.

“Coach Carr resigned because he wanted a new opportunity, and I respect that — that’s all there was too it,” Welch told WSAF-TV prior to McDermott’s accusation, adding: “We welcome all race, religions, everything here at Edgewood. We have never seen a problem with that. We have white students, black students, Asian students. We all get along, they are all part of the Edgewood family.”

McDermott is currently seeking a waiver from the board of trustees of the $1,300 transfer fee per student — a contractual requirement upon enrolling at Edgewood, according to WSAF-TV.

The accusations against Edgewood’s board of trustees are incredibly incendiary, and waiving the fee now would almost appear as an affirmation of their alleged racial bias, so this back and forth between the school and lawyers representing its student-athletes may be just beginning.