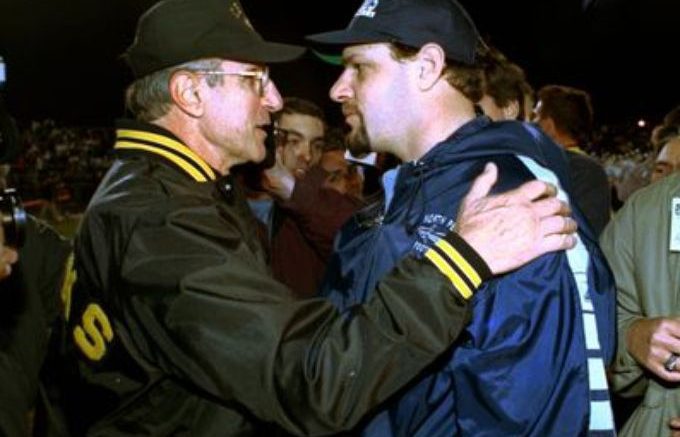 Mike Pettine Sr., left, greets his son after the two faced off against each other as Pennsylvania prep coaches — Photo USA Today

It was with great sadness that I learned on Friday that legendary Pennsylvania high school football coach Mike Pettine, Sr. had passed away.  Coach Pettine, who is the father of former Cleveland Browns head coach Mike Pettine, Jr., reportedly died suddenly at his winter home in Florida at the age of 76.

Coach Pettine became a friend of mine in the early 90’s when he was the head coach of Central Bucks West High School in Doylestown where he led the Bucks to 326 wins and four state championships.  Coach Pettine was one of the first coaches to publicly endorse The Big Ticket, a Friday night highlight show that I created at WFMZ-TV in Allentown, Pennsylvania.

The friendship continued long after he retired and I left Pennsylvania.  Three years ago, Coach Pettine joined me on the High School Football America Radio Show to talk about his son taking-over the Browns, plus reminisce about his years at C.B. West.  You can listen to that interview below.

Coach Pettine was a tough coach, but a very fair man who will be missed.