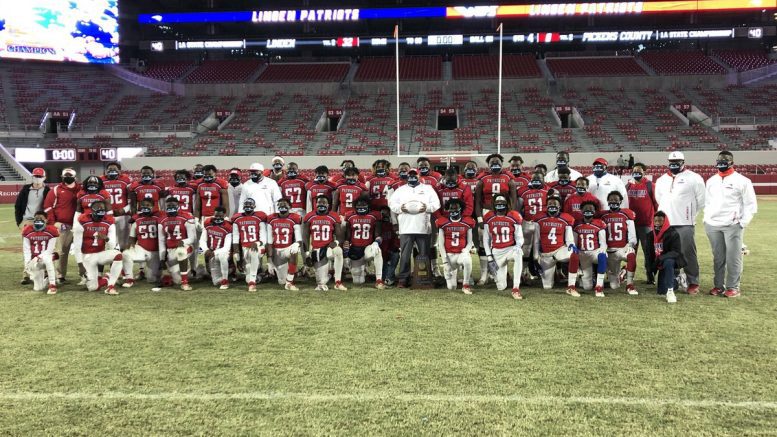 Below is a game recap from our friends at PrepsNet.com.

Tuscaloosa, AL – The Linden Patriots claimed the first state football championship in their program’s 100 year history in a 32-8 drubbing of the Pickens County Tornadoes Thursday afternoon in Tuscaloosa.

The Super 7 showdown was rematch for the west Alabama programs.  Linden blanked the Tornadoes 36-0 in their week one regular season meeting.

The Patriots, who finished the regular season ranked second in class 1A closed out their historic season at 14-0 capping the program’s first undefeated season in school history.  10th ranked Pickens County closed out 2020 at 11-4 finishing second in 1A region 6.

The Patriots lit up the Bryant-Denny scoreboard first on a 1 yard Joshua Williams touchdown bolt three minutes into the first period.  The Tornadoes answered back with three minutes and change remaining in the opening stanza as Kajaveion Byrd pulled down a 13 yard pass from Javion Belle.  Xerrance Washington tacked on the two point conversion to put Pickens County up by a pair with 3:23 left before the break.

Linden reclaimed the the advantage on their next possession on a Josuha Williams to Savion McIntosh 35 hard scoring strike.  Jamar Williams hooked up with Tim Thurman for the two pointer to give the Patriots a 14-8 lead heading into the locker room.

The second half was all Linden.  Zelly Aldridge began the Patriots 18 point second half run with a 3 yard scoring scamper.  Championship game Most Valuable Player Jemarcus Williams put the game on ice scoring a pair of defensive touchdowns at the end of the third.  The first was an 18 yard pick-six followed by a five yard fumble recovery for a score.

Patriots signal caller Joshua Williams finished the game with 90 yards though the air completing 5-of-8 passes with one touchdown and an interception.  Zelly Aldridge lead the Linden rushing attack running for 43 yards and a score on 11 carries.  Johnny Blackmon was Williams favorite target hauling in two Williams passes for 39 yards.

Pickens County quarterback Javion Belle completed 12-of-25 throws for 151 yards including a touchdown pass and a pair of interceptions.  Xerrance Washington and Kajaveion Byrd added 10 rushing yards apiece and Byrd pulled down 8 catches for 121 yards and a score.