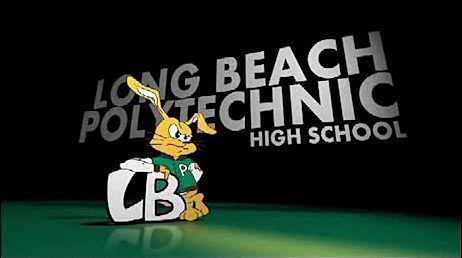 The first of three long bus rides for this year’s Long Beach Poly football is underway as the Jackrabbits are on their way to Peoria, Arizona for Friday’s season opener against Centennial, Arizona’s defending Division II champ.

Head coach Antonio Pierce and his players will get frequent rider miles this season with future trips to Las Vegas for a match-up with Bishop Gorman, #3 in the High School Football America Preseason Top 25, on September 18th.  Four weeks later, Poly will head north to play preseason #1 De La Salle.

In addition to those two national powers, Poly will also play a road game against LA City Section champ Narbonne.  In all, the Jackrabbits, who are expected to cruise to another Moore League title after setting an all-time league scoring record last year with 351 points, will only play three home games this year.

First, the former New York Giant doesn’t have the luxury of a bunch of talented seniors like he inherited in his first year.  Poly is coming-off an 11-2 season that ended in the CIF-Southern Section semifinals with a 33-21 loss to St. John Bosco.

Up until Wednesday night’s news from Pierce that Florida State recruit Malik Henry had been admitted into the school, wide receiver/cornerback Jack Jones was at the top of the talent list  Jones is listed as the #5 prospect in the High School Football America Class of 2016 Composite Player rankings that combines his ratings by 247Sports, ESPN, Rivals and Scout.

Jones is coming off a junior year that saw him lead the team with 64 catches with five touchdowns.  On defense, Jones had one pick.

Until the Henry saga results in him putting on a Jackrabbit uniform, the reigns of the offense go to junior Nolan McDonald, who is consider a dual-threat QB.  In mop-up work in blowouts last year, McDonald completed 4-of-6 passes.

Aside from Jones, Pierce must find replacements for nearly all of his skilled players because of graduation.  Taking some focus away from Jones will be wide receiver Davir Hamilton, who transferred from Verbum Dei.  Hamilton has given his verbal commitment to Utah.

As far as Friday’s opener, Centennial is coming off a 12-2 championship season, but this year the school will move-up to Division I.

Various media reports say Centennial head coach Richard Taylor says he has one of his best offensive lines ever, which will get a real test against a Poly team that expects it defense to lead the way at the start of 2015.