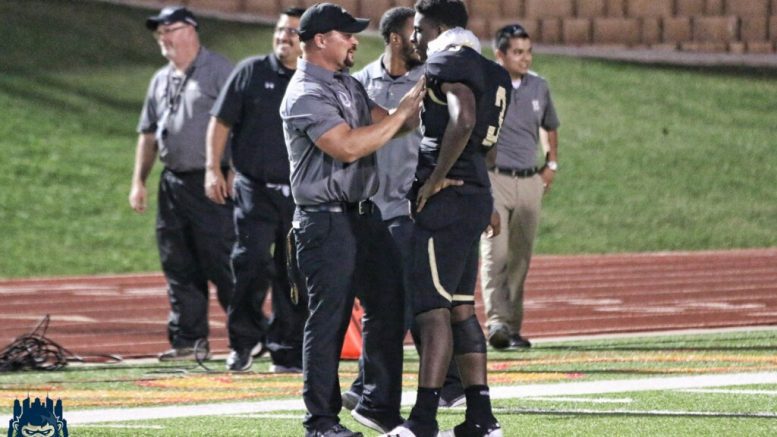 High school football across America comes in all shapes and sizes.  However, it’s just a bit different in Texas.

No offense to any other states, and I’ve personally watched games big-and-small in fourteen different states, but the birthplace of Friday Night Lights approaches and embraces the sport like no other.  The fans are passionate, proud and rabid.  The coaches are treated differently than in other states and the pressure to win is also different.  The student-athletes are hometown heroes, dealing with the pressure of legacies hand-down across generations.

Using all of this as the backdrop, I’d like to tell you about the story of Lubbock High School. Many of you already know a little bit about the Lubbock Westerners, located in west Texas, from head coach Jason Strunk, who writes The Turnaround blog for High School Football America.  Since 2012, Coach Strunk has taken readers deep inside his program that has a resume unlike any other in the football-crazed state.

When Strunk took over in 2011, Lubbock hadn’t been to the playoffs since 1975 and hadn’t had a winning record since 1998.  Strunk, who always wanted to coach in Texas after reading Buzz Bissinger’s book Friday Night Lights, was excited to end the playoff drought for LHS, which claims famous signing alums like Buddy Holly and Mac Davis.

Strunk arrived in Texas, fresh-off a great job as the head coach at Plant City in Florida.  In 2008, Strunk took a Plant City team that had won just six of its previous 32 games.  In 2009, he led the Raiders to a 7-3 mark and a playoff berth, the school’s best season in fourteen years.  The team’s quick rise resulted in it being featured by ESPN, Scout.com and CBS Sports.

“I love coming-in and building from the ground floor up,” said Strunk, who left Plant City in 2010 to become the offensive quality control and assistant offensive line coach at Purdue University.

“I hired Coach Strunk because of his success at rebuilding, especially at Plant City,” said Mark Ball, who recently retired as the Athletic Director at the Lubbock Independent School District, overseeing Lubbock High and three other schools in the district.  “I also like that he had experience at the Division I and Division III levels.”

Ball, who had a in addition to a fine career as an athletic administrator was a head football coach at Wylie in northeast Dallas along with head coaching stops at Lake Travis, Whitesboro and Graham, added, “I liked the fact that Jason was someone that would not be affected subconsciously by Lubbock High’s football history.  I did extensive research on him and talked in-depth to others and I knew his story of adversity with the death of his mom and how he picked himself back-up and made something of himself after nearing rock bottom.”

In Strunk’s second season in 2012, the Westerners not only snapped a 25-game losing streak, but also made it to the playoffs for the first time since 1975.  Lubbock hasn’t made it back to the postseason since then, but Strunk’s enthusiasm hasn’t waned, even with an overall record 7-47.

I only point-out the overall record, because this isn’t a story about wins and loses.

When Strunk took-over, he tells the story that there was only one football in the entire field house and only 65 players in the program from 9th through 12th grades.  Strunk and his hard-working staff have increased that number to 225 players in the program and now there are plenty of footballs.  The players have joined in large numbers because of the family-type atmosphere that Strunk and his staff implemented on Day One.  In many cases, he coaching staff serves as surrogate fathers and mothers to the Lubbock players.

Now to the present…

The Westerners are off to an 0-4 start, however, Strunk says the players are very close to getting over-the-hump behind a defense that has been stifling at times against very good offenses like Andrews High School, which is a perfect 4-0, having scored 43 points in one win, 65 point in another and 77 points in an overtime victory.  Andrews only scored 28 against Lubbock in a 28-16 victory.  In the second half, Andrews offense didn’t score on the Westerners.

Three of the four losses have come against teams that are undefeated — Seminole (3-0), Dumas (3-0) and aforementioned 4-0 Andrews.  Lubbock’s four opponents have a combined record of 12-2.

On Monday, Strunk wrote a blog that has gotten a lot of attention from coaches around the country.  Strunk, as he’s apt to do, laid it on-the-line about how hard his kids are working and that decades of  losing at Lubbock doesn’t make his kids losers.

@WestTxCoach tell your boys and your staff I read your blog to my team today. Pulling for you guys!

@HSFBamerica @WestTxCoach @txhsfbchat you’re kids are playing hard and are on the verge! Tell them to keep striving and it will happen!

.@WestTxCoach Great statement for your team. I transitioned from football to politics & it’s all a contact sport. The lessons are for life.

Without further ado, below is an except of Monday’s The Turnaround by Jason Strunk:

I know this.  We are not the most talented team on the field.  We get by with effort.  We play teams that are more athletic than we are, but we play harder than our opponents.  We play hard and we play harder when needed.

You need to be ready to play four quarters when you line up against us.  We will not quit.  We will not relent.  We are a bunch of fighters.  You will not break us and you cannot break our attitude and mindset.  We will just keep coming at you.

This team is awesome.  They have bought in.  We are getting by on grit and toughness.  We are pushing teams to the brink because we play hard.  Nobody can ever take that away from us.  We are going to come after you. Eventually, we are going to flip the
win-loss column.

Our kids get disrespected daily.  They hear all the time how bad they are.  The common line is, “you guys suck.”  Imagine hearing that every day in your own hallways.  It is mind-numbing.

This has been going on at LHS for 40+ years.  The problem didn’t start with my current team, they weren’t even born when LHS began their struggles.  But, they pay for it every day.  My players pay for the past 40 years of struggles.  It isn’t right.  It isn’t fair.

My message to them on a daily basis is life isn’t fair sometimes, but you need to keep moving along.  You cannot let negativity get to you.  Tune-out the noise is theme every day.  We control “we.”  The naysayers do not suit up for practice.  They do not come in on weekends.  They do not matter.  The naysayers have no clue what we do.  Truth be told, they couldn’t handle the rigors of a football season and the stress that comes with it.  That’s why they don’t hit the field with us.

What I am telling you is this: we play hard and we don’t care what you think of us.  You better show up to play when LHS is in the stadium.  We aren’t going anywhere.  We will fight you to the death, if need be.

This is a special group of young men.  They are figuring life out through the ups-and-downs of football.  They are relentless in their pursuit of progress.  They want to win and they work for it.

There are coaches in this state, and other states, winning state titles yearly.  They wouldn’t last a week in my chair.  This is a special place and it takes a special coaching staff to persevere.  This job isn’t for the weak.

Attitude and effort.  It’s life and football.  We will continue to march forward, with total disregard for naysayers.  We will play hard and give you all you can handle.  I will make sure this happens until the day I die.

I love this team and the young men in that locker room. They are fantastic kids. We are in this together.

That’s all I have to say about all that.

Click here to read all of this year’s blog posts.

The Turnaround: Look back and forward

The Turnaround: Matt Millen and Baseball