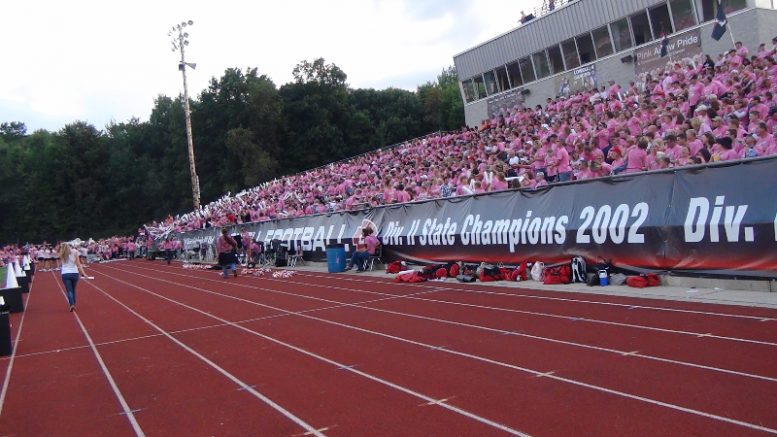 Friday night when the Lowell Red Arrows take the field against Ottawa Hills, the small town Michigan team will do what its been doing since 2008, turning into the Pink Arrows.  For the past nine years, Lowell has been raising money and awareness for cancer in the town outside of Grand Rapids by turning all of its Friday Night Lights into a brilliant shade of pink.

The Pink Arrow Pride game was the brainchild of head coach Noel Dean, who decided he wanted his players to wear pink jerseys printed with the names of loved ones, who have been affected by cancer.  The team even turns its helmet logo from red to pink.

Tickets to the game come in the form of pink t-shirts that also carry the names of loved ones.  Since its inception, the Pink Arrow Pride game has raised $1.5 million.  The money stays in the Lowell community to help in different ways.  In 2009, money from the event led to the renovation of Lowell’s Senior Neighbor Building, which would eventually become the home to Gilda’s Club, known nationally for its free cancer support community. According to my research, Lowell was the first school in America to create an all-pink event of this magnitude, and the best part is that Dean, who has won 200 games as the head coach at Lowell, and the rest of his pink supporters have gone out of their way to teach other schools and communities how to emulate their success. In 2011, Lowell head coach Noel Dean was joined by Pacqui Kelly, cancer survivor and wife of Notre Dame head coach Brian Kelly for a seminar for other schools on how to hold a fundraiser.

As far as the game itself, Lowell is hard to beat when it’s all pink.  The Pink Arrows are a perfect 8-0 coming into its Pink Arrow Pride game against Ottawa Hills.

High School Football America attended Pink Arrow Pride III and IV and you can watch our video from 2010 below.

Below you can also listen to our 2011 Pink Arrow Pride interview with volunteer Teresa Beachum on the High School Football America Radio Show.