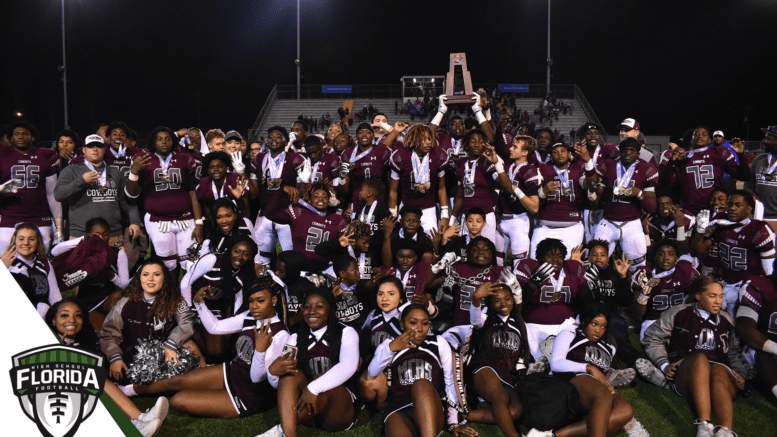 Below is a game wrap-up story from our friend Josh Wilson, founder and owner of FloridaHSFootball.com.

TALLAHASSEE, Fla. – It was one of those games that where everything that could go mostly, did exactly that if you were Madison County.

But it also was one of the nights for Blountstown in a losing effort that saw a state record get smashed that had just been set the night before in the Class 3A State Championship – one that will hold likely hold up for decades to come.

That is how the 2019 FHSAA Class 1A State Championship went down at Gene Cox Stadium in Tallahassee on Saturday night.Advertisement

For most of the first quarter and early second quarter, things were evenly close with both Madison County (12-2) and Blountstown (13-1) trading scores to get the scoring run going in the game.

Vinsonta Allen, who would end up scoring a combined seven touchdowns on the night, got the scoring going first with a 1-yard run to cap off a four-play, 69-yard drive with 7:15 left in the first quarter after both teams had traded punts on their first possessions.

However, Blountstown was ready to answer – an answer that would quickly give them the lead with a Treven Smith touchdown from six yards out with 2:45 left to get the Tigers on the board. However, a missed extra point put them down 7-6.

The next play though caught almost everyone off guard as Blountstown when for an early – and traditionally untypical – onside kick that went right through the hands of one of the Madison County players to end up in the hands of Carson Hatchett who made the recovery at the Cowboys’ 33-yard line.

With the ball back it only took one play with a 33-yard scamper from Smith to put the Tigers ahead 14-7 with 2:31 left in the first quarter after a successfully two-point conversion from Alex Valdez

It wouldn’t take too long though for Cowboys to answer the Tigers back with Robert Hiers going up the gut from four yards out on a 55-yard drive that tied the ball game at 14-14 going into the second quarter.

But… Blountstown was cooking things up again for Smith, as he blasted a 74-yard touchdown run down the sideline to get the Tigers up ahead capping off an 82-yard drive just mere seconds into the second quarter.

After that though, the touchdown exchanges came to a grinding halt as Madison County’s defense locked things down and getting things back in the hands of Vinsonta Allen who would end up being responsible for four more touchdowns in the first half of the game with three rushing touchdowns and one more rushing touchdown.

All the scoring game the Cowboys a 35-21 lead at the half.

The second half saw the scoring continue with a chance that Blountstown would come back to make it a game, but Madison County got the scoring going again early in the first half with just one minute off the clock with another Vinsonta Allen touchdown run that gave them a commanding 42-21 lead.

The Tigers came rolling back with an answer with 9:57 left in the third quarter with Smith’s fourth touchdown of the night with an added two-point conversion to put the score at 42-29.

After that though, the Cowboys put the game away the rest of the third quarter with an 81-yard kickoff return from Octavius Davis, a 61-yard touchdown reception from Derrion Staten to Jacoleman Young to put the Cowboys ahead 56-29 at the end of third quarter.

For Madison County head coach, his senior class been the big reason why they were able to win their third-straight Class 1A state championship.

“This 2020 group has been unbelievable. Unbelievable people, No. 1. My son is a part of that and they have grown up together,” Coe said.

And Coe credits the schedule for part of the reason why they were able to do things.

“With the schedule we played, I put our schedule up against anyone in the state of Florida,” Coe Said

As for Vinsonta Allen’s big night? Coe told it like it was.

“He’s playing pissed off. He doesn’t have any major offers. He is one of the best football players I have ever coached in my life and I have coached five of them playing in the NFL. He’s got it. He’s special. He has tremendous football IQ and can play on both sides of the ball,” Coe said.

Allen finished the night 4-of-6 passing for 166 yards and two touchdowns while carrying the ball 13 times for 247 yards and five rushing touchdowns.

As for Smith’s for record-breaking night? He didn’t have many words for it, not even realizing he had broken the record that was set the night before.

“I just came out here do my thing and get the ball. Make them pay,” Smith said.

At the end of the night, Smith rushed for 365 yards and 24 carries and five touchdowns, breaking the 333 yards rushing set by Thaddius Franklin of Chaminade-Madonna the night before. It is a record that will likely stand for ages to come.

Both teams finished the night also with a combined 979 yards of total offense, one of the highest outputs since the 2012 Class 8A state championship game at the Citrus Bowl in Orlando between Apopka and Cypress Bay.

No. 13 Carol City takes down No. 4 Miami Central in South Florida Showdown