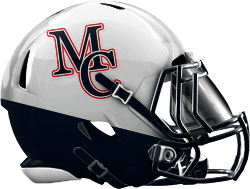 Next Saturday, High School Football America will release its Preseason Top 25.  Between now and then, we’ll take a look at some of the top teams that are vying for spots in our national rankings.

One of the biggest reasons that the Mavericks, who finished #16 in our 2013 national rankings, will be in position for a spot in the 2015 preseason poll is the return of quarterback James Smith, who threw for 35 touchdowns last year and ran for 25.  At 5-11, 180 pounds, Smith put up over 4,900 yards in total offense last year — with over 3,300 coming through the air.  He was also the state title game MVP in Mallard Creek’s 25-14 win over Wake Forest in a rematch of the 2013 North Carolina 4AA championship game.

Unlike 2014 when Mavericks’ head coach Mike Palmieri needed replace 36 seniors, 18 of whom were starters, this year’s squad returns a ton of talent beyond Smith.  Mallard Creek has three players listed in the state’s top 50 players for the Class of 2016, according to 247Sports.

The Mavs, who already were strong at the skill positions with the return of Smith, running back Chancery Bowman and wide receiver Javon Harbison, picked-up three key transfers that will make a difference — tight end Thaddeus Moss, wide receiver Corey Sutton and athlete Will Eason.

Moss, son of NFL All-Pro wide receiver Randy Moss, is one of the top tight ends in the Class of 2016. Friday he visited NC State.

Sutton, who has already given his verbal to Kansas State, transferred from Hough HS.

Last year, Mallard Creek averaged over 40 points a game with Smith operating behind a great offensive line that should be better with a year’s worth of seasoning.

On defense, the Mavericks are led by linebacker Josh Brown, a 4-star Florida State recruit, who is considered the 17th best Outside LB in the country by 247Sports composite rankings and the ninth best prospect in the state.

We’ll find-out how good Mallard Creek is right at the start when they play three games in 14 days to start the season. And, three games will be big tests.

Jeff Fisher’s Editor’s Note: For the third straight year, High School Football America will use its propriety algorithm for its in-season Top 25 national rankings.  The preseason poll, that will be released on August 1st, will be a combination of the algorithm, using statistics from the 2014 season and strength of schedule, and our opinions based on returning starters, tradition and more.  Our first in-season poll will be released on Sunday, September 6th and every Sunday after.  The in-season polls are solely-based on our algorithm — no opinions are factored into the in-season and final rankings.