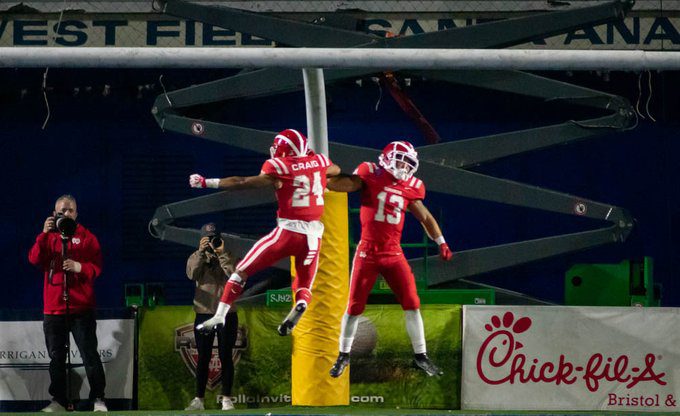 Mater Dei is sending notice to other teams hoping to vie for the Fall 2021 High School Football America “mythical” national championship after its 34-17 defeat of St. John Bosco Saturday night for the Trinity League championship. There is no postseason in California, but it’s hard to argue with the fact that MD, which won national titles in 2017 and 2018, is the top team in California for the six-game spring regular season.

The Monarchs took-down our 2019 national champs with freshman QB Elijah Brown tossing four touchdown passes at the Santa Ana Bowl. Two of the TD passes went to CJ Williams to give Mater Dei a 24-14 halftime lead.

These are high school athletes. CJ Williams with the catch. 14-14. It’s just getting started. Mater Dei and Bosco. pic.twitter.com/GfAZTx1g3p

Brown finished with 14 completions in 23 attempts for 203 yards.

One of the most impressive parts of Mater Dei’s season this year was the play of their freshman QB, @ElijahBrown_29. And as I heard from @_JosiahZ_ & @CJWilliams_03, he’s just getting started 🏈⬇️ pic.twitter.com/j4Fas8hEkN

Mater Dei finishes a perfect 5-0, while SJB wraps-up the spring with a 5-1 mark.

No. 1 Mater Dei (California) cruises past No. 3 St. Frances (Maryland)

MaxPreps honor’s St. John Bosco as #1 in the nation