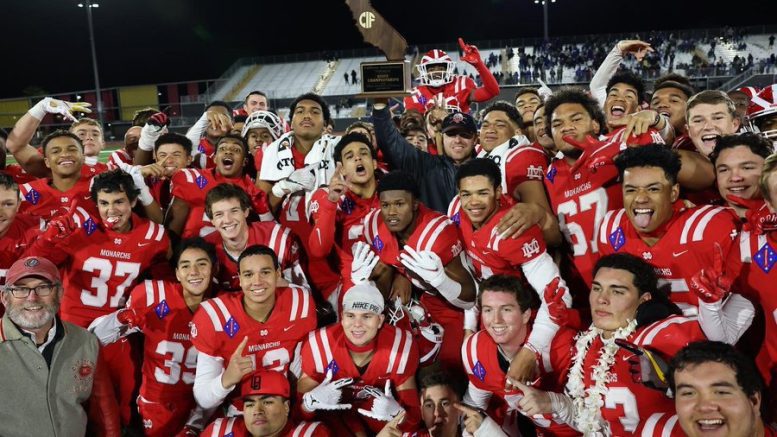 Saturday will go down as one of the biggest days in the history of Mater Dei High School high school football.

On the east coast Saturday night, former Mater Dei quarterback Bryce Young was named the winner of the 2021 Heisman Trophy. Then, on the west coast, about five hours later, the No. 1 team in the High School Football America 100 national rankings, won the California Open Division state title.

Mater Dei beat No. 75 Serra (San Mateo) 44-7 to cap a perfect 12-0 season that will ultimately lead to the school’s third national championship in the last five years when we release our final 2021 rankings next Sunday.

This game was never in-doubt as MD roared to a 31-0 lead through the middle of the third quarter. The blowout began on the third play of the game when Elijah Brown connected with Cooper Barkate on a 78-yard touchdown pass.

After a Pick-6 by Malaki Te’o and a fumble recovery that turned into a Raleek Brown 1-yard touchdown run, the rout was on.

Mater Dei coach Bruce Rollinson carried around on the shoulders of players after the state championship win over Serra ⁦@ocvarsityguy⁩ pic.twitter.com/UxOzt9dzd7

Brown, who is only a sophomore, completed 18 of 25 passes for 243 yards and two touchdowns. Brown hasn’t lost a game as the program’s starter.

Congrats to our Monarchs on an outstanding season! We are proud of our student-athletes for their dedication this season, both on and off the field!#WeAreMD pic.twitter.com/gLLxNsgzRF