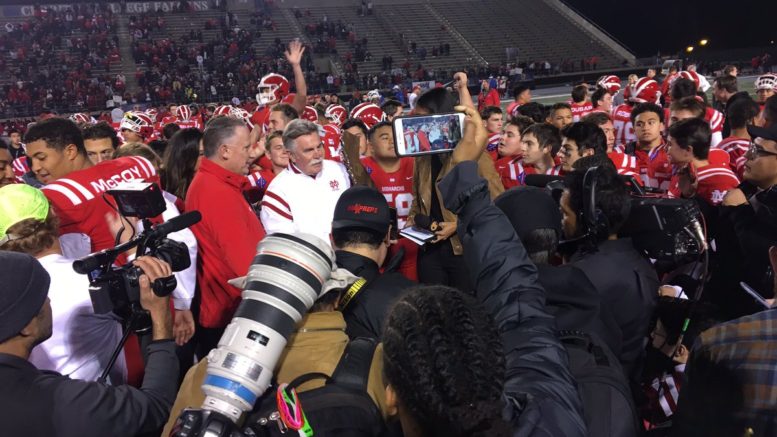 Allen (Texas), currently No. 2 heading into Sunday’s release of a new Top 100, still can pick-up two more victories this year. The Eagles face current No. 30 Duncanville in next week’s Texas Class 6A Division I semifinals. A win in the semis would mean the Eagles would face the winner of the game between No. 8 North Shore and No. 32 Lake Travis.

While a state championship would help Allen in its Strength of Schedule, it’s doubtful that it will be enough to push the Eagles ahead of Mater Dei. While, as a state, Texas has been strong this year, Allen’s only win over a Top 100 team was against East High from Utah, which currently isn’t ranked in the HSFA 100.

So, back to the Saturday night win that saw Mater Dei get out to a 28-7 lead through three quarters. De La Salle was able to close to within 28-21 with a little more than six minutes left to play in the game.

Shakobe Harper iced the victory when he scored his third touchdown of the game on a 15-yard run with 3:55 left. Harper finished with 122 yards in 22 carries.

The cherry on the sundae for Mater Dei is the victory was the 300th of head coach Bruce Rollinson’s illustrious career.

Where the Top 25 plays this week