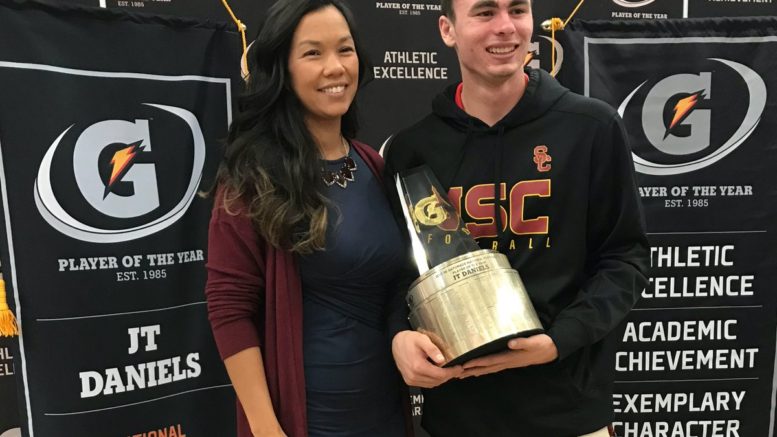 Quarterback J.T. Daniels, who guided Mater Dei to High School Football America’s “mythical” national championship over the weekend, is the 2017 Gatorade National Football Player of the Year.   The USC-recruit, who still has his senior season ahead of him in 2018, passed for 4,123 yards and 52 TDs this year.  On Saturday, Daniels and his teammates closed-out a perfect 15-0 season by winning California’s Open Division championship.

“JT really deserves to be this year’s Gatorade National Football Player of the Year because he represents everything the award stands for,” said Watson. “Not only has JT excelled on the field, but he’s also a good student and a positive role model in the community. I’m excited to follow his career and watch all the things he will accomplish in the future.”

Daniels has maintained a weighted 4.18 GPA in the classroom. He has volunteered as part of Mater Dei’s Monarchs for Marines program supporting the troops and families of the First Marine Division stationed at nearby Camp Pendleton. He has also donated his time locally delivering care backpacks to the homeless and as a youth football coach.

As a part of Gatorade’s cause marketing platform “Play it Forward,” Daniels also has the opportunity to award a $1,000grant to a local or national youth sports organization of his choosing. He is also eligible to win one of twelve $10,000spotlight grants for his organization of choice, which will be announced throughout the year.

Daniels is now a finalist for the prestigious Gatorade Male High School Athlete of the Year award, to be presented at a special ceremony prior to The ESPY Awards in July.

Daniels is the second quarterback from Mater Dei to win the prestigious Gatorade Award. Matt Barkley won the award in 2007.