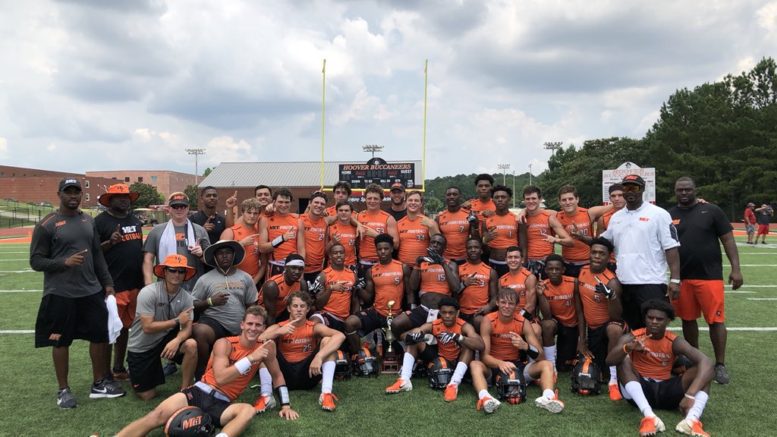 McGill-Toolen captured the Hoover City Elite National 7 on 7 championship Saturday with a 26-4 win over Spanish Fort (Alabama) in the title game. The Yellow Jackets, who will begin the regular season against Spanish Fort on August 24, received Honorable Mention when High School Football America released its preseason national rankings on July 1st.

After finishing 7-1 during pool play, M-T opened championship play by beat North Forsyth (Georgia) before disposing of two teams ranked in our Preseason 100 — No. 44 Mallard Creek (North Carolina) 20-10 in the quarterfinals and No. 37 Colquitt County (Georgia) 18-12 in the semis.

McGill-Toolen quarterback Sheldon Layman, who’s given his verbal to Memphis, played throughout the tournament. He’s coming off an excellent junior year that saw him complete 149-of-236 passes for over 1,900 yards and 21 touchdowns while leading the Yellow Jackets to the 7A title game where they lost to Hoover.

Hoover, ranked No. 6 in our Preseason 100 was without the services of starting quarterback Robby Ashford. After going a perfect 8-0 during two days of pool play, the Bucs lost to Colquitt County in the quarterfinals. CC is coached by former Hoover head coach Rush Propst.

For those of you wondering, this tournament replaced the USA Football 7 on 7 national championships.

Defending 6A champ Oxford moves to No. 3 in the High School Football America Alabama Top 10