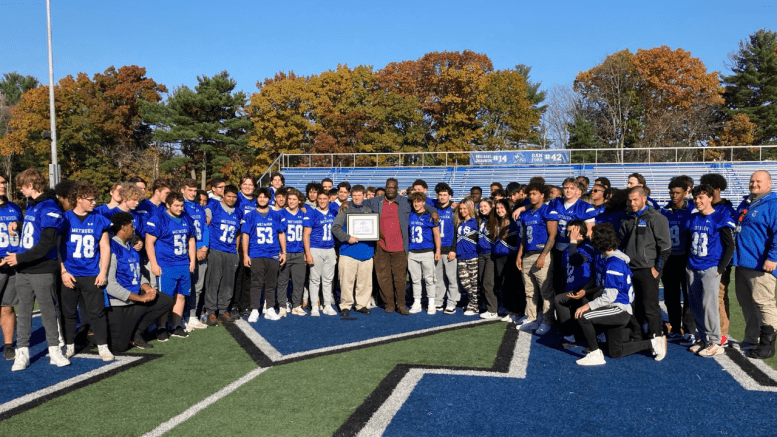 Coming off a dramatic 25-22 victory over the unbeaten Everett Crimson Tide on Friday in the first round of the Division 1 tournament, Methuen High School’s Tom Ryan has been named the ninth New England Patriots High School Coach of the Week of the 2021 season.

Coach Ryan, currently in his ninth year as head coach of the Methuen football team, guided the Rangers to one of the most memorable and significant victories in program history Friday night. Advancing in the Division 1 tournament took a combined effort, however, with senior captain JP Muniz leading the way on the field. Muniz battled through a leg injury to grab the game-winning touchdown catch with 3:55 left to play and then secured the victory with a pair of interceptions in the final four minutes.

It was a great ceremony today at Nicholson Stadium as Andre Tippett on behalf of the New Engalnd Patriots presented Coach Tom Ryan his Coach of the Week Award! Congrats Coach! @Patriots @AndreTippett @tomryanmethuen @MHSVC_methuenhs pic.twitter.com/yWRmLZj2gb

“Led at the helm by Coach Ryan, this Methuen team is a relentless bunch,” said Tippett. “Coach Ryan has developed an excellent culture and winning tradition within this football program, and we wish him and the Methuen Rangers the best of luck in their playoff run.”

The Rangers will look to ride their momentum into the Division 1 quarterfinals this weekend as they travel to take on top-seeded Franklin (8-0) on Friday, November 12 at 7 PM.

Patriots, College, and Pro Football Hall of Fame linebacker Andre Tippett, now the team’s Executive Director of Community Affairs, met with the Methuen captains and coaching staff Tuesday morning to present the football program with a $1,000 donation on behalf of the Patriots Foundation in honor of Coach Ryan. The visit and check presentation will be featured on the Patriots weekly television show, “Patriots All Access,” which airs on Friday night at 7 p.m. on WBZ-TV in Boston and will be available immediately after on Patriots.com.