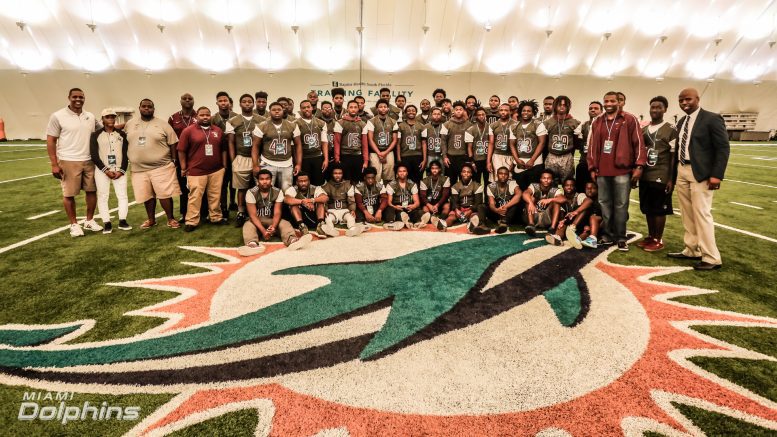 The Miami Norland High School football team was the guest of the NFL's Miami Dolphins at Monday's OTA.

The NFL’s Miami Dolphins are making sure they are reaching-down to the roots of the game by hosting local high school football teams at this week’s Organized Team Activity or OTA practice. On Tuesday, the Dolphins hosted the Miami Norland Senior High School football team at Nova Southeastern University.  The team had the opportunity to watch the Dolphins practice and meet with current players on the field.  Players and coaches were also given a tour of the Baptist Health Training Facility and listened to former Dolphin Twan Russell, the Miami Dolphins Youth Programs Ambassador, talk about mental toughness and having a positive mindset. “I can’t thank the Dolphins organization enough for what they did for our team,” said Norland head coach Daryle Heidelberg. “Twan was right on point with some of the things that he was saying about the kids focusing on your goals and asking yourself, ‘Why are you doing what you’re doing?’ He really touched on mental toughness, which will take you a little further when your body starts to shut down. All eyes were glued in.” “I got a chance to experience new things. I saw one of my favorite players, Jarvis Landry. I got a chance to get up close and personal with the players,” said Norland wide receiver Jamari Harrison said. “The receivers, they communicated really well. Their coaches expect a lot from them, so it’s just a good experience.”

The Miami Dolphins Youth Programs’ mission is to transform the lives of youth football players by instilling character building and reinforcing safety standards that help to increase football participation and grow a new generation of Dolphins fans.