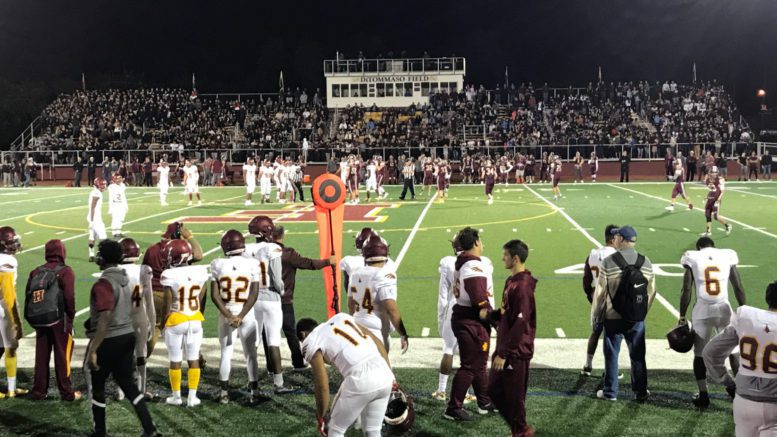 I consider Alumni Stadium to be sacred grounds. The fact that I get to cover a great game between the Lions and Cardinal Hayes only adds to the excitement of my trip down memory lane. 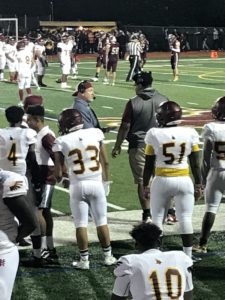 Friday night, Alumni Stadium was the place to be for New York City football. Cardinal Hayes, led by head coach C.J. O’Neil, entered the game ranked No. 3 in the High School Football America New York Top 10 that is created with its proprietary algorithm. Farrell head coach Anthony Garofola brought his Lions into the game ranked No. 7 in the HSFA statewide rankings. A week ago, Hayes lost its opener to No. 2 Iona Prep in a 51-48 shootout.

Coming into the game, these two were the top-ranked teams in the five Boroughs of New York City, which means absolutely nothing aside from personal bragging rights. In a league that stretches from Westchester to Eastern Long Island, the teams from NYC are simply a part of the puzzle.

The high-powered Hayes offense is led by junior quarterback Sofian Massoud. He’s an impressive athlete, who has already secured offers from Boston College, Rutgers, Virginia, Temple and Dartmouth. In my opinion, he is the best overall player in New York City.

Massoud was a starting safety as a freshman on Hayes’ 2016 championship team and is now in his second season at quarterback. As a sophomore he threw for 37 touchdowns and 3,106 yards, both statistics good enough to put him in the Top 10 in New York State history. He is the complete package as a quarterback…huge arm, fast, quick, and generally impossible to contain in the pocket. In fact, the only possible knock on him, according to Coach O’Neil, is that Massoud is “too competitive,” referring to him as “a Paul O’Neill type.” Coming from the Bronx, that reference has some extra special meaning!

Last week in their opening game, Massoud picked-up where he left off in the loss Iona Prep in which Hayes started slow and ran out of time in the end in the 51-48 shootout. Their offense looked to be right back on its record-setting pace. Farrell, coming in at 3 – 0, had yet to be tested by the upper echelon of the division this season. Unfortunately, no matter how many games you win, this division is judged by what you do against the top four teams.

Garofola was one of my high school coaches at Farrell. We coached together for a decade and against each other the past five years while I was the head coach at St. Peter’s. He is a great friend and mentor, so I knew what his answer would be when I asked him if this was a “must win?” He said, “Definitely not. nothing is a must win until the playoffs.” I did get him to concede that a win would “send a message to the NYC Football community.”

Coach O’Neil, who I know doesn’t believe in “must wins” either, laughed saying, “It’s never a must win. we preach being resilient all the time, and we won the championship a few years ago starting 0 – 4.”

I agreed with Coach O’Neil, but this was a MUST win for Farrell. The consensus on Farrell coming in was “let’s see what they do versus Hayes before we decide how good they are.”

This was Farrell’s fourth game and only the second for Hayes, which annually is at their best at the end of the season. Many felt, if Farrell was to knock them off this year, it would have to be now. In a division where everyone makes the playoffs, these games are a fight for home field advantage in November. It’s nearly-impossible to win on the road in November in these parts.

From my perspective, Farrell has its best team from what I’ve seen in recent memory. They have a young, impressive, junior-laden defense that runs to the ball and tackles well. They pair that with a solid offense with a star at all three levels. It starts with running Back Vin Wagner, the leading rusher in the Catholic High School Football League a year ago. Add into the offensive mix quarterback Mike Regan and wide receiver Tait. However, for Farrell to win this game it was the O-Line that would have to win its matchup. Coach Garofola agreed when I talk with him before the game.

In the game itself, Farrell came out with a bang scoring on their first drive with some gashing runs and a few nice wrinkles on offense. Because of Hayes’ high-powered offense, I felt that Farrell knew they might have to keep up with a frantic scoring pace.

Hayes looked out of sync at the beginning of the game, but you could see the matchup issues they present along with Massoud’s individual ability. It seemed they were a play away from exploding on offense. However, Hayes also did very little to help themselves with several drops and were penalized eleven times in the first half.

The first quarter ended with the Lions leading 10 – 6, but it felt like Hayes was the only thing stopping Hayes.

Less than a minute into the second quarter, Hayes got rolling when Massoud connected with Tafari Mason for a touchdown. The Cardinals would score two more times in the second, exploiting some matchups, while Farrell was struggling to find the offensive success it had on its first drive.

Hayes took a 24-13 lead into the halftime locker room.

After a fumble on their first possession of the second half, I thought Farrell was doomed until I saw a completely new look from the Farrell defense. This adjustment was the story of the game. I was immediately excited to see if it would work and what Hayes would do to counterpunch. The most exciting aspect as a former coach is watching the chess match unfold.

The first thing I noticed was that Farrell’s outside linebackers were now out in the face of the slot receivers. That was the matchup issue I noticed in the first half. Hayes slots were getting free releases against Farrell’s safeties and were not going to win that matchup in one-on-one coverage. I felt Hayes could continue to run four verticals until Farrell made an adjustment and that’s exactly what they did.

Farrell also seemed to widen their inside linebackers and made an adjustment on the line that forced Massoud out of the pocket. Several people around me were noting that Massoud had a ton of time to throw, but the reality was that it was part of Farrell’s game plan in the second half.

Farrell was consistently dropping 7 or 8 men, giving Massoud time to throw, but nowhere to go with it. A linebacker spying would take off when Massoud tried to run. In coaching terms, Farrell presented Hayes with an extremely light box, banking on the fact that Hayes would continue to sling it and that’s exactly what happened.

After a Hayes blocked a FG attempt with seven minutes left in the third quarter, Farrell was still struggling to get anything going on offense. A tough defensive stand by Farrell forced Hayes to punt and Wagner scored on a well-designed, short screen pass 47 yards, cutting the Hayes lead to 24 – 19. The score remained that way until four minutes to go in the game.

With both team’s defenses keeping the opponent in-check it, was fitting that this defensive battle would need a special teams play to decide the outcome. That’s when Farrell blocked a Hayes punt and Chris Ortalano returned it 42 yards for a touchdown and a 26-24 Farrell lead.

A huge kick return for Hayes and short drive gave the Cardinals a 4th and 11 from Farrell’s 16 yard line with 28 seconds left to play. Hayes shot at the end zone fell short and the Lions celebrated a 26-24 victory.

Although there is absolutely no award for being the best Catholic High School Football team in the five Boroughs of New York. I can confirm that for the first time in a long time, the Farrell Lions are clearly the #1 Ranked team in NYC.

As a former coach, the story of the game was the halftime adjustment.

When I asked both coaches about it I once again got the answers I expected. Coach O’Neil didn’t mention the adjustment, he simply stated that, “They played harder and smarter than us.”

Coach Garofola said, “We stayed within our package. The kids tightened the screws and we tackled and pursued better.” He was happy that the team would be recognized as the top ranked team in the city, but he also noted “there are no breaks in the schedule…none.”

Next up for Farrell is No. 2 Iona Prep, while Hayes will play Christ the King.

In other NYC Football News