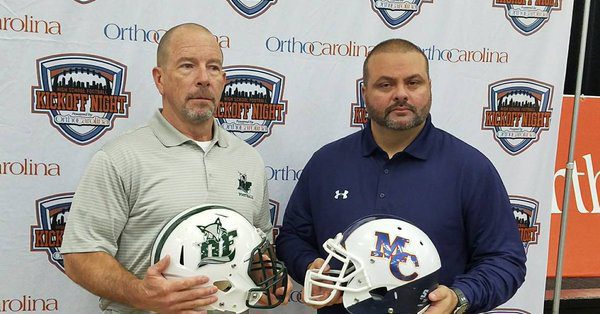 The highly-anticipated Carolina showdown between two-time defending South Carolina champ Dutch Fork, ranked No. 25 in our Preseason 100, and No. 44 Mallard Creek (North Carolina) never got of the ground Saturday night thanks to storms in the area.

The teams actually made it to the field, but according to the Charlotte Observer‘s Langston Wertz reported via his Twitter account that the teams were taken off the field about nine minutes later.

Mallard Creek and Dutch Fork kick off in 30 mins pic.twitter.com/LbP3fHCC6q

With 21 mins left in warmup, lightning causes at least 30 min delay before Dutch Fork-Mallard Creek. Going to be starting after 10 now

Because North Carolina rules state that high school football games can’t be played on Sunday, officials decided not to start the game, because more than likely, the game would last past midnight, which would not allow the teams to finish what they started.

According to media reports, there was talk that the two could play on Monday, but Mallard Creek has a big showdown on Friday against in-state rival Butler, which would only allow the Mavericks three days to recuperate and prep for the game.

, @dfhsfootball Tom Knotts uses a prom analogy about his team not being able to play Mallard Creek #thestate pic.twitter.com/s1cN4wWo9J

No. 24 Corona Centennial storms back to beat No. 39 Orange Lutheran in SoCal Showdown