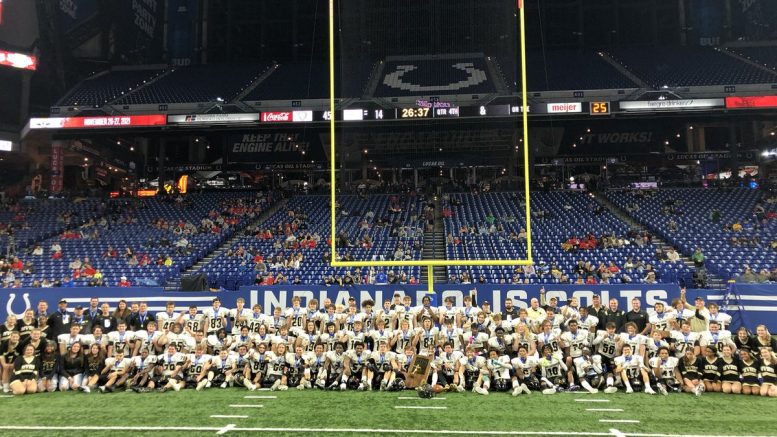 The following is from the IHSAA

Mt. Vernon quarterback Gehrig Slunaker threw for 235 yards and three touchdown passes, while Keagan LaBelle ran for 76 yards and a score to lead the Marauders offense. The defense did its part, as well, holding the Raiders to 178 total yards and also scored on 59-yard interception return by Ashden Gentry. Gentry also caught a touchdown pass from Slunaker.

The game featured both teams making their first state finals appearances, the Marauders took a 7-0 lead less than three minutes into the contest on a LaBelle’s 24-yard run and never trailed.

The Marauders had advanced past the regional only once before (2014), but finished the season 14-1, winning their final 14 games after an opening-game loss to Noblesville.

Academically, Gehrig currently carries a 3.81 GPA and is ranked in the top 20% of his senior class.  He has been involved with AfriCan, Best Buddies, Junior National Honors Society, the Leadership Council, and the Marauder Mob (Spirit Club).

He is the son of Jeff and Jennifer Slunaker of McCordsville, IN. He is undecided on his college choice but plans to play football and study Business and Sports Management.

The Indianapolis Colts, the presenting sponsor of the IHSAA state tournament, presented a $1,000 scholarship to Mt. Vernon’s general scholarship fund in the name of Gehrig Slunaker.

No. 8 Center Grove tops No. 93 Westfield to win back-to-back Indiana 6A state championships