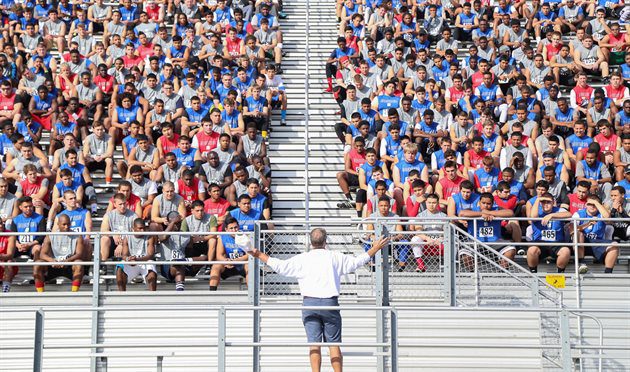 The National Football Foundation and the College Football Hall of Fame will host four high school football showcases in over the next month in our different regions around America.  The NFF High School Showcases, which are absolutely free to both participants and college recruiters, provide academically eligible high school players, who did not sign an NCAA Division I letter of intent, an opportunity to go through a series of drills in front of divisional college coaches from the NCAA Division II, III and the NAIA levels. Last year, the events attracted representatives from 110 colleges covering 30 states, coupling them with more than 1,000 aspiring college players who earned millions of dollars in academic and participation scholarships.

“It means the world,” said Phil Camp, who created the first showcase in Houston in 2009. “If one kid gets an offer, then this is worth it. You get an inner city kid who’s never been out of the city and he goes to one of these schools and gets an education and a chance to play football. How great is that.”

Camp, who was then the head football coach at Milby (Houston, TX), and the NFF Touchdown Club of Houston Chapter joined forces with 75 coaches from the Houston Independent School District to stage the first showcase. Last year the Houston event had 800 high school seniors enroll with coaches from 54 Division II, III and NAIA universities in attendance, both single-year records for the showcase.

“Most of these types of events around the country charge a fee to participate, excluding a lot of great kids who can’t afford the price of admission,” said NFF Chairman Archie Manning. “The events in Houston, Los Angeles, Charlotte and South Florida provide all student-athletes an opportunity to pursue their dream of attending college.  The NFF Showcases provide a cost effective way for us to make a huge difference in the lives of these kids, and the impact has been phenomenal.”

“The leaders in these four cities all deserve huge praise for their efforts to expand opportunities for kids to earn their college degrees with football opening the door,” said NFF President & CEO Steve Hatchell. “­Their leadership has helped build a free system, literally providing thousands of talented student-athletes the opportunity to continue their educations. The Showcases provide a great path to college that previously did not exist.”

The first of this year’s four showcases will be held this Saturday in Irvine, California at Orange County Great Park.  The Southern California event began in 2013 under the direction of College Football Hall of Fame coach Terry Donahue, who led UCLA from 1976 through 1995.  Last year, the event attracted 599 high school seniors, who worked out for 55 Division II, III and NAIA universities, and organizers counted 152 players, who landed on rosters with financial aid at two-and-four year colleges.

“This is an incredible opportunity for the kids to continue their education and play the great game of college football, and it’s free,” said Donahue. “There are so many combines and showcases, but this one really has legs to it because it’s totally free for the players and the colleges.”

Participants, who all have to meet minimum academic standards, compete in a series of athletic drills designed to let divisional college coaches assess each player’s potential, including a 40-yard dash and several agility and strength tests. The events allow the college recruiters a unique opportunity to evaluate a large number of qualified student-athletes in a short period of time while minimizing their travel costs.