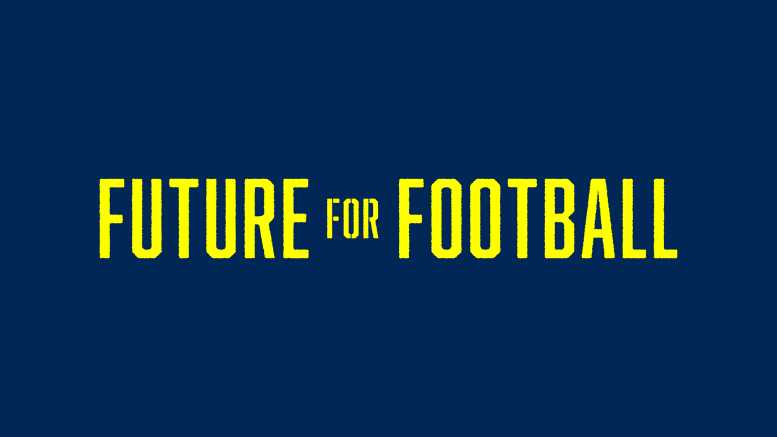 The National Football Foundation (NFF) & College Hall of Fame announced today the rebrand of Football Matters as Future For Football. The cross-platform multi-media campaign has celebrated the positive impact the game has made on millions of players, coaches, administrators, volunteers, and fans nationwide since its debut in early 2018.

“This year has been anything but ordinary and the game and communities at all levels have been faced with many challenges,” said NFF President & CEO Steve Hatchell. “However, we find ourselves with a very unique opportunity as some form of football will take place now through January 2022. Future For Football will highlight the amazing impact the game has, and will have, on all of us for the foreseeable future, and we are here to support the game in any and all ways necessary.”

Future For Football has become one of the key initiatives of the NFF for the last two-and-a-half years. Through its news bureau function and robust content, it has engaged many people who are part of the game, as well as the entire community that surrounds football, such as cheerleaders, band members, trainers, parents, media or any passionate fan who cares about the game. During that time, it has received more than 40 national awards for excellence in marketing and communications for its storytelling efforts.

For the next 18 months, Future For Football will identify and create original stories that celebrate and showcase the people and organizations playing in the fall and spring. For the immediate future, the campaign will delve into unique topics such as the impact of fantasy football, the popularity and influence of football video games, every day peoples’ stories and claims to fame around the game, little known facts about football, the intersection of pop culture and the gridiron, and football heroes. Then in mid-2021, Future For Football will feature an initiative on why there has never been a better time to play. It will create engaging content through its news bureau function, public service announcements, advertisements and resources. It will help both the industry and parents at a national and grassroots levels understand why the game has never been better, and why has never been a better time to play – be it through more options to play and be a part of the game, as well as equipment and technique advancements that have made it better.

About The National Football Foundation & College Hall of Fame
Founded in 1947 with early leadership from General Douglas MacArthur, legendary Army coach Earl “Red” Blaik and immortal journalist Grantland Rice, The National Football Foundation & College Hall of Fame is a non-profit educational organization that runs programs designed to use the power of amateur football in developing scholarship, citizenship and athletic achievement in young people. With 120 chapters and 12,000 members nationwide, NFF programs include Future For Football®, the Chick-fil-A College Football Hall of Fame in Atlanta, The William V. Campbell Trophy® Presented by Mazda, the NFF National Scholar-Athlete Class Presented by Fidelity Investments and a series of initiatives to honor the legends of the past and inspire the leaders of the future. NFF corporate partners include Delta Air Lines, ETT, Fidelity Investments, Goodyear, Mazda, the New York Athletic Club, the Pasadena Tournament of Roses, the Sports Business Journal and Under Armour. Follow us on Facebook, Instagram and Twitter @NFFNetwork and learn more at footballfoundation.org.