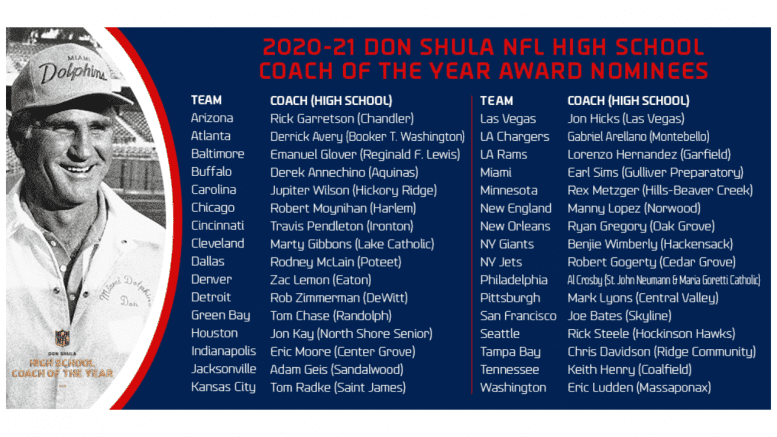 The 32 finalists for the 2020-2021 Don Shula NFL High School Coach of the Year Award are some of the best that sport has to offer. On Thursday, the NFL announced the finalists in the running for the prestigious award named after the National Football League’s all-time winningest coach, who was inducted into the Pro Football Hall of Fame in 1997.

The coaches (below) were recognized by their local NFL club for their character and integrity, leadership, dedication to the community, commitment to player health and safety and on-field success.

“This year’s 32 Don Shula NFL High School Coach of the Year nominees represent the crucial role that high school football coaches play in positively shaping the character of players,” said NFL Vice President of Philanthropy and Executive Director of the NFL Foundation, Alexia Gallagher. “We are proud to honor these coaches who have provided exemplary mentorship to student-athletes both on and off the field.”

“It is great to collaborate with Nike and other partners to celebrate coaches and the positive influence they have on high school student-athletes,” said NFL Vice President of Football Development Roman Oben. “Congratulations to this year’s nominees, especially given the challenges presented over the past year”.

Three of this year’s nominees led their schools to a national ranking in the 2020-21 High School Football America 100 powered by NFL Play Football, the NFL’s initiative to provide fun and engaging experience for players of all ages and skill levels.

The Houston Texans named North Shore’s Jon Kay as their Coach of the Year after the Mustangs came-up a game short of defending their back-to-back Class 6A Division I state titles. North Shore finished No. 8 in the final Top 100 after spending most of the 2020-21 season ranked No. 1.

Arizona Cardinals‘ High School Coach of the Year Rick Garretson led Chandler to a No. 17 finish in our national rankings after the Wolves won the state’s Open Division. It was the Wolves fifth straight state championship.

Eric Moore of Center Grove is the Indianapolis Colts Coach of the Year. Last year, Moore led the Trojans to a 6A state championship and a No. 15 ranking in our national rankings.