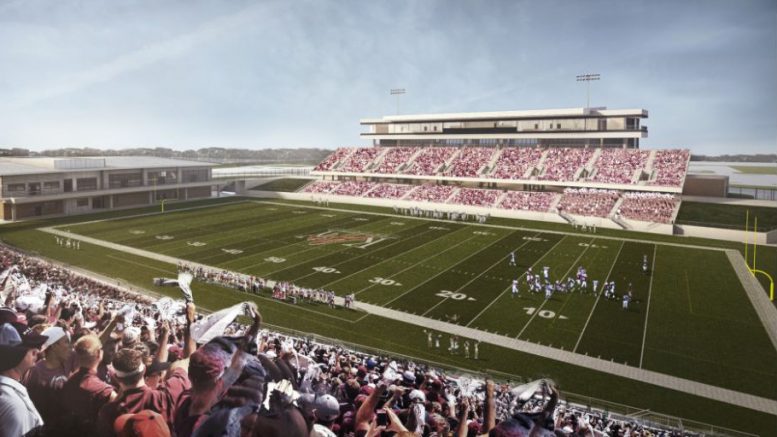 The new Katy ISD football stadium now has a name, Legacy Stadium, to go with its $72.1 million price tag. It is the most expensive prep facility in Texas high school history. (Photo: Katy Independent School District)

Initially, the Katy (Texas) High football stadium turned some heads for its initial estimate of a $58 million price tag.

By this past October, that number had skyrocketed to $70.3 million.

That price for the forthcoming stadium has crept up to $72.1 million. Aside from a hefty cost, though, the 12,000-seat future home of the Tigers now has a name – Legacy Stadium.

Officials tell the Houston Chronicle the name reflects the suburban district’s rich history and its adopted vision statement, “Be the Legacy.”

According to the Chronicle, the school board also approved naming the stadium’s field after former Katy football coach Mike Johnston, who led the Tigers over 22 years to five state championship appearances and three state titles.

The stadium’s name “speaks to the people who have come before and created an impact and a legacy, and it speaks to those who will come after and create legacies here,” school board President Rebecca Fox told the Chronicle. “(Johnston) was an impactful person that wasn’t just about football but about creating good young men out of those he interacted with. He was a football coach but he was known more for the positive influence he had.”

Two months ago, trustees had agreed to sell the namesake of the district’s football complex, which includes the new stadium and the adjacent 9,700-seat Jack Rhodes Memorial Stadium, to Katy-based sporting goods giant Academy Sports + Outdoors. The district and Academy agreed to a 10-year sponsorship contract worth $2.5 million, making Katy Independent School District one of several Houston-area school districts to have sold naming rights to a football stadium or complex.

Other names in consideration by the naming committee were “Tradition Stadium” and “Katy Prairie Land Stadium” in addition to those of former and current coaches, as well as others. Seven high schools currently call Rhodes Stadium home, with an eighth opening in the fall.

The additional $14 million from the original price tag have stemmed from costs related to building the venue — such as road improvements around the complex, connectivity between the two stadiums and a $1.8 million video replay board.

Once Legacy Stadium opens, there will also be a two-story fieldhouse and fine arts plaza, as well as greenery space in between the complex’s two venues. The stadium is costing more to build than McKinney’s 12,000-seat planned venue ($70 million) as well as Allen’s 18,000-seat venue, which opened a few years ago and cost $60 million.

“I don’t want to belabor the 2014 bond and where we are in the cost,” Katy superintendent Lance Hindt, who was not in Katy during the 2014 bond when the school board approved the added costs, told the Chronicle. “I believe when the stadium opens, that all of that will be a distant memory because the community will rally around … the stadium. Legacy Stadium was something that was needed for our students and district.”