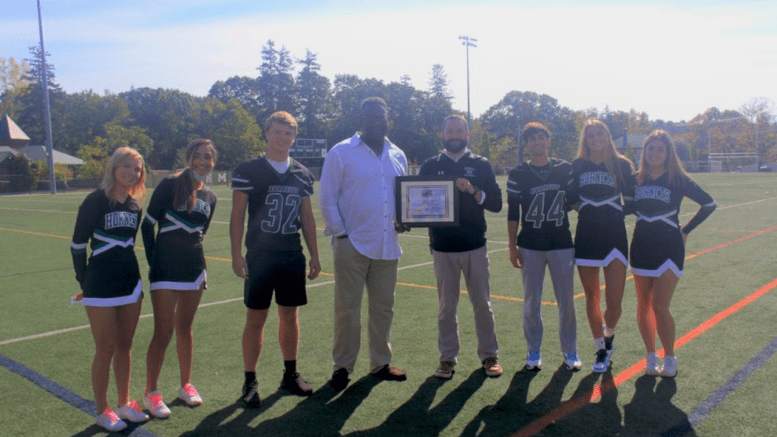 Grimes, currently in his first year as head coach of the Manchester Essex Regional High School football team, led the Hornets to their fifth straight win on Saturday afternoon on the road at Manning Field. With prior victories this season at Ipswich (21-8), vs. Nashoba Valley Tech (49-0), vs. Lynn Vocational Tech (32-22) and vs. Cathedral (43-13), the Manchester Essex Hornets improved to a perfect 5-0 record while handing the KIPP Academy Panthers their first loss of the 2021 season.

Lock-down defense and a dominant running game helped Manchester Essex come out on top of Saturday’s battle of the unbeatens. Ben Hurd (two sacks) and Troy Flood (one sack) fueled the Hornets’ defense while A.J. Pallazola and Brennan Twombly both came away with interceptions. In a combined effort on the ground, the Hornets ran the ball for a season-high 249 yards to help control the game and secure the victory.

Patriots, College, and Pro Football Hall of Fame linebacker Andre Tippett, now the team’s Executive Director of Community Affairs, met with the Manchester Essex captains and coaching staff Tuesday morning to present the football program with a $1,000 donation on behalf of the Patriots Foundation in honor of Coach Grimes. The visit and check presentation will be featured on the Patriots weekly television show, “Patriots All Access,” which airs on Friday night at 7 p.m. on WBZ-TV in Boston and will be available immediately after on Patriots.com.

“It’s remarkable the impact Coach Grimes has already had on this team in just his first year here,” said Tippett. “Guiding the Hornets to a massive victory this past Saturday and to an undefeated season thus far, Coach Grimes is more than deserving of this week’s Patriots Coach of the Week honor.”

For the 11th straight year, the Patriots will also be accepting nominations for High School Coach of the Week honors. Those who wish to nominate a high school football coach in New England who leads a team to an exceptional weekly performance or reaches a personal career milestone are encouraged to send submissions to [email protected] All nominations must be submitted following a team’s Friday night or Saturday afternoon game to be considered for that week’s Coach of the Week award.

The Manchester-Essex Hornets will look to keep their perfect season alive as they host the Minuteman-Regional Mustangs at Hyland Field at 7:00 p.m. on Friday, October 15.