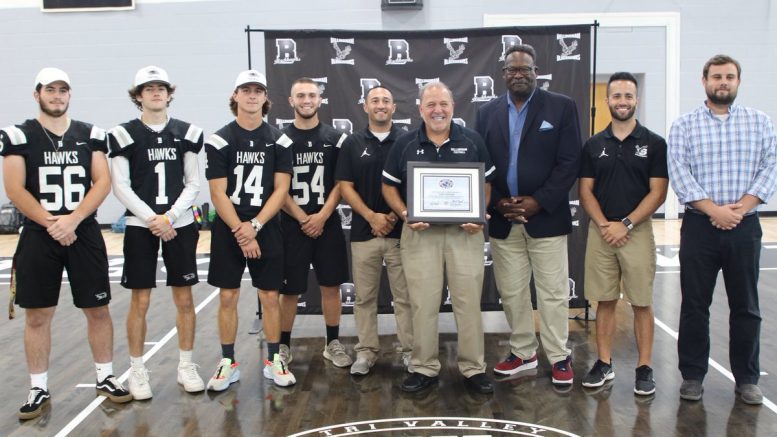 Below is a news release from the New England Patriots

Following a commanding 22-0 victory over Blackstone-Millville/Hopedale on Saturday, Bellingham High School’s Dan Haddad has been named the first New England Patriots High School Coach of the Week of the 2021 season.

Coach Haddad, currently in his seventh year with the team, led Bellingham to their first Tri-Valley League Small title since 2001 this past spring as the Blackhawks went a perfect 5-0 on the season. Bellingham continued their strong play last year into their season-opener on Saturday with a shutout victory at Blackstone-Millville Regional High School.

Bellingham’s Gavin Elder broke a scoreless tie with a beautiful touchdown pass midway through the third quarter, and the Blackhawks never looked back from there. Elder had two touchdowns passes on the day while Calvin Polchlopek added one score on the ground as the Blackhawks cruised to a 22-0 shutout in their first Tri-Valley League game of the season.

With the win, Bellingham improved to 1-0 to start the 2021 fall campaign. The Blackhawks will look to extend their impressive winning streak dating back to last season when they take on St. Mary’s High School on Friday night in Bellingham.

Patriots, College, and Pro Football Hall of Fame linebacker Andre Tippett, now the team’s Executive Director of Community Affairs, met with the Bellingham captains and coaching staff Tuesday morning to present the football program with a $1,000 donation on behalf of the Patriots Foundation, in honor of Coach Haddad. The visit and check presentation will be featured on the Patriots weekly television show, “Patriots All Access,” which airs on Friday night at 7 p.m. on WBZ-TV in Boston and will be available immediately after on Patriots.com.

“Coach Haddad has done incredible work for the Bellingham football program over the years, and it is time he is recognized for it,” said Tippett. “With his team coming off a perfect 5-0 spring season and a shutout this past Saturday, Coach Haddad was an easy choice for the first Patriots Coach of the Week honor of 2021.”

For the 11th straight year, the Patriots will also be accepting nominations for High School Coach of the Week honors. Those who wish to nominate a high school football coach in New England who leads a team to an exceptional weekly performance or reaches a personal career milestone is encouraged to send submissions to [email protected]. All nominations must be submitted following a team’s Friday night or Saturday afternoon game to be considered for that week’s Coach of the Week award.