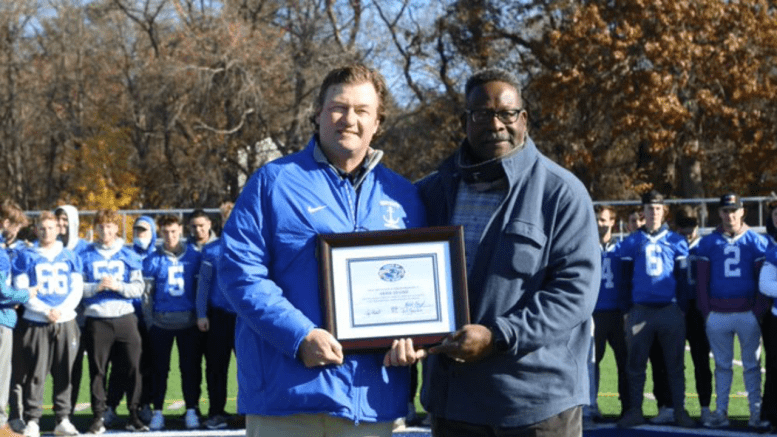 Coming off his 100th win as head coach to help secure his team a spot in the semifinals of the Division 4 state tournament, Scituate High School’s Herb Devine has been named the tenth New England Patriots High School Coach of the Week of the 2021 season.

Coach Devine, currently in his 13th season as head coach of the Scituate football team, guided the top-seeded Sailors to the Final Four on Friday night with a thrilling 21-14 victory over Ashland at Scituate High School. Winners of eight in a row, the Scituate Sailors are red hot at the right time.

The Sailors were led by Andrew Bossey, back on the field for the first time in three weeks due to a sports hernia, who rushed 19 times for 134 yards and a touchdown. Scituate’s Keegan Sullivan secured the victory with an interception in the final few minutes of play, but that was not the last time he would touch the ball. Sullivan presented the game ball to Coach Devine in honor of his 100th victory at the school, and the team erupted in cheer.

“Coach Devine’s leadership is unmatched, and his coaching record speaks for itself,” said Tippett. “100 wins as a head coach is a remarkable feat. Coach Devine has developed an excellent culture and winning tradition within this football program, and we wish him and the Scituate Sailors the best of luck in their playoff run.”

The Sailors will look to ride their momentum into the weekend as they take on fourth-ranked Grafton (10-0) with a trip to Gillette Stadium for the state championship game on the line.

Patriots, College, and Pro Football Hall of Fame linebacker Andre Tippett, now the team’s Executive Director of Community Affairs, met with the Scituate captains and coaching staff Tuesday morning to present the football program with a $1,000 donation on behalf of the Patriots Foundation in honor of Coach Devine. The visit and check presentation will be featured on the Patriots weekly television show, “Patriots All Access,” which airs on Friday night at 7 p.m. on WBZ-TV in Boston and will be available immediately after on Patriots.com.