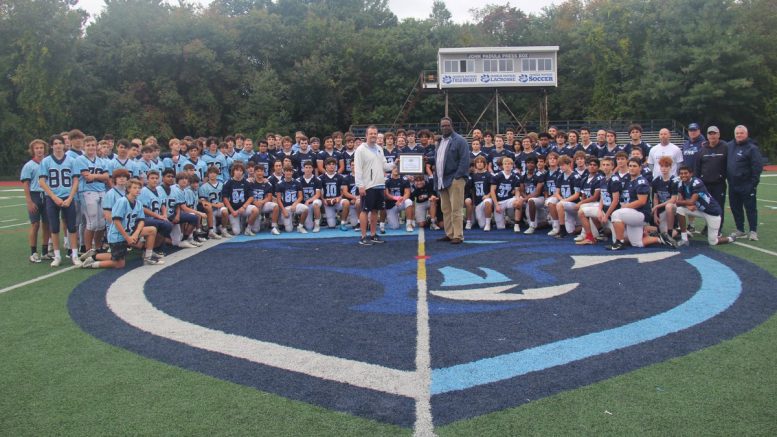 Bain, currently in his sixth year as head coach of the Franklin High School football team, led the Panthers to their first victory over the Mansfield Hornets since 2009 to improve to a perfect 4-0 record on the season. Franklin quarterback Jared Arone threw four touchdown passes to help the Panthers snap the Hornets’ 19-game win streak.

For the first time ever, Franklin is now ranked in the High School Football America Massachusetts Top 10, powered by NFL Play Football. The Panthers currently sit at number 10 in the rankings while Mansfield, previously ranked number seven, fell out of the top 10. With wins over Wachusett (37-21), Brockton (37-7), Duxbury (27-14) and now Mansfield (28-10), Coach Bain and the Franklin Panthers have proven many doubters wrong.

Patriots, College, and Pro Football Hall of Fame linebacker Andre Tippett, now the team’s Executive Director of Community Affairs, met with the Franklin captains and coaching staff Tuesday morning to present the football program with a $1,000 donation on behalf of the Patriots Foundation in honor of Coach Bain. The visit and check presentation will be featured on the Patriots weekly television show, “Patriots All Access,” which airs on Friday night at 7 p.m. on WBZ-TV in Boston and will be available immediately after on Patriots.com.

“Coach Bain’s advanced game planning and leadership have been on full display this season,” said Tippett. “Guiding the Panthers to a historic win on Friday night under the lights, Coach Bain was an easy choice for this week’s Patriots Coach of the Week honor.”

The Franklin Panthers will look to keep their perfect season alive as they host Taunton at 7:00 p.m. on Friday, October 10.