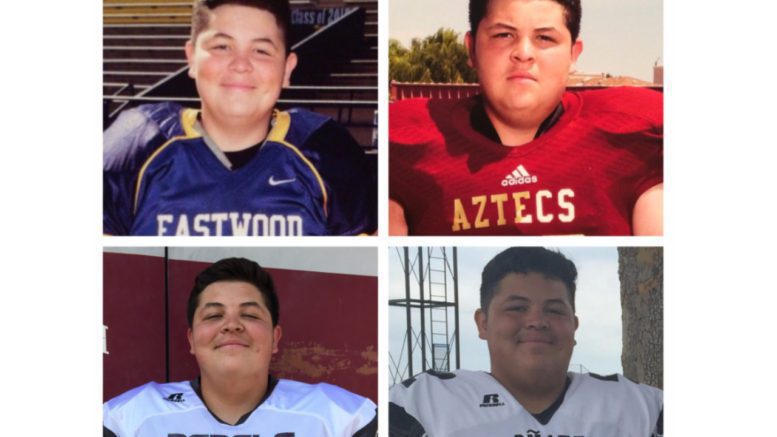 The life of a teenage is never easy. They are not little kids anymore, yet they are not quite adults. We put a ton of pressure on them to do the right thing and our twisted society is never much help either. But, through it all we hope that we’ve raised our children with a sense of responsibility, character, drive, and determination. We hope that we have equipped them with the tools they need to be successful in life at whatever they choose. I write this because I want to dedicate my last blog of the regular season to my son Justin, who just finished playing his last game for me. My younger son Brandon will be upset when he finds out what this is about, but he’ll get one written for him next year!

I realize I’ve written about my boys before and I’ve touched on topics like family and fatherhood, but this one is a little different. I want to pay homage to a young man that attended four high schools in four years, because of my career, and succeeded at every place he attended. Yeah, you read that correctly; four high schools in four years. Most kids would need therapy if asked to do something like that; but my kid thrived. The amazing part is that every time a move was about to occur his response was “I’m cool with it, Dad; as long as I get a chance to play ball and as long as you, my brother, and myself are together.” Unselfishness at its finest.

When he began playing T-Ball at the age of 3, he was already the most focused kid on my team. No, he wasn’t the best at the time, just the most-focused. If we had a 7pm game that evening, he wanted to start getting ready at noon. I’ll always remember his third game, not the first, the third. In his first two, he successfully reached base and scored every time. But in our third game, their 3rd basemen threw him out in his first at-bat. He came back to the dugout and preceded to kick the water cooler as the other 4 and 5 year old looked on in amazement. I left the 3rd base coaches box and entered the dugout. I ripped him and took him out of the game for his antics, but inside I thought “this dude, is just like me; even as a 3 year old this matters to him; he already understands the importance of competition.” Even though I didn’t like his tantrum, I loved his competitive spirit. Every other kid on our team that year would make an out and then look for his mom or dad to bring him some sort of treat. Not my son. From that day forward, we was always the one kid that understood what was at stake every game and he understood the importance of athletics, while having fun participating in them.

In high school, he began his career at El Paso Eastwood as a freshman while I was the offensive coordinator there. He started at center for us and in the spring he pitched and played 1st base on the baseball team. After that season I accepted a similar position at El Paso El Dorado, so as a sophomore him and his brother went with me and once again he started at center for our JV team and even played QB his last three games and led the team to a 2-1 record. Yes, a center moved to QB. Justin has always been an athlete in a lineman’s body and he never misses a chance to let me know that he can run and catch the ball as well as any of our receivers. I usually roll my eyes in response. When that year ended, our head coach retired and I applied for the job. After a lengthy process, I made the finals but I lost out on the job to another local coach. I felt moving on would be the best thing to do and when an offer from Lee High School in Midland, Texas came along, we sat down to discuss it again. I fully expected him and Brandon to say that they didn’t want to leave El Paso and their friends. But once again the response was “let’s go Dad!” I even told them they could finish their careers at El Dorado and that I would sit out a year or two just to watch them, but they weren’t having it. So his junior year was spent at Midland Lee playing varsity baseball & football, and excelling at both. By January of 2017 we were more than ready to leave Midland and I gave them the option again. We could stay there or I could search for head coaching jobs, of course they choose the latter. By the grace of God, I got the Oñate job in May of this year and once again, my family followed blindly. All Justin did was start both ways for us, become a leader for our team, and he maintained the A’s and B’s he has been earning for years. To top it all off, he even started at QB for us in our final game last week. Once again, yes you read that correctly; we moved our center to QB. And he didn’t do too badly, even though we lost.

Justin has been successful academically and athletically everywhere we have been simply because of his attitude and personality. He made friends at every single school and always fit in immediately. He is an unselfish, charismatic leader with an infectious personality. No doubt in my mind this will serve him extremely well once he begins teaching and coaching. It’s always hard when your child is about to graduate, but it is excruciatingly difficult to see them go when you’ve been coaching him on and off for 14 years. I LOVE YOU CHUBB! THANKS FOR BUSTING YOUR BUTT FOR ME ALL THESE YEARS. YOU ARE EVERYTHING A FATHER COULD ASK FOR IN A SON!