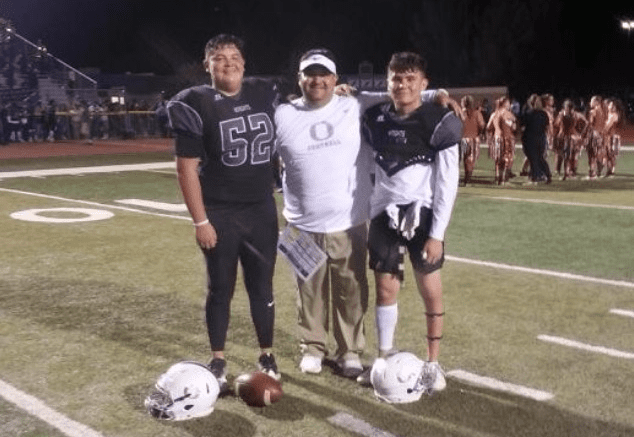 Most coaches are would be pretty comfortable being up 49-6 at halftime. I was not. In New Mexico there is a 50 point mercy rule, meaning once a score reaches that margin the game is called automatically. The second half kickoff flew towards Monroe Young, our return man, he made two moves and 99 yards later he was in the end zone. We knocked home the extra point to increase the margin to 56-6, and with that I notched my first win as a head coach. I have to be honest, it was an absolute great feeling. No, it did not rank-up there with the birth of my children or my marriage, but it was pretty high on the list. The team we beat, Gadsden High School, has not been very good historically, but neither have we. I am sure people expected us to win that game 35-21 or something competitive like that, but not by 50 in one half. I do have much respect for Gadsden’s players and staff. They compete hard and play with great effort.

When you fight and strive your whole career to reach the summit of your profession by getting a head job, then you start off 0-4, you start to think that first win may never arrive.

Even though we never pushed a panic button, it was tough being winless. As a coach, no matter how we need to lead from the front and stay positive, doubt creeps in and sometimes you start to reassess if you are doing things the correct way. “My way” is not always the only way. Sometimes we have to pull back on certain things we are used to pushing forward on and sometimes we have to push harder on things we are used to pulling back on. Was that as confusing as it sounded? It is about rolling with the punches and staying true to what you believe in.

As coaches we are always trying to reinvent ourselves. That does not mean changing systems and beliefs every week, but we must be adaptable to our surroundings and our players. While it did feel like a monkey was off my back, I was most happy for my players and my staff. They have worked tirelessly to help me build a new brand of Oñate football day in and day out.

As a head coach, you take all blame and responsibility when things are not going the way they are supposed to. So it hurts when you see the people following you not being successful on a Friday night. It makes you want to work harder than ever to fix it. We have five games left in front of us now, and we firmly believe in our hearts that we are capable of winning each one, starting with this Saturday at 1pm.

Finally, one of the greatest things about our Friday night win was that our players seemed more excited about getting me my first head coaching win over actually winning our first game. That was truly extraordinary. It was expected when my sons, Justin and Brandon, went over to me as soon as the game ended and hugged me and yelled in my ear, “congrats on your first win, Dad,” but when the majority of our kids came over to me to congratulate me, I was blown away. That right there tells you the kind of high character, high class kids we have at Oñate. Sure they were happy about being 1-0 in district, but selflessly, they were happier for me. Amazing. We must be doing something right. No. 88 Kahuku (Hawaii) is looking for a new head coach