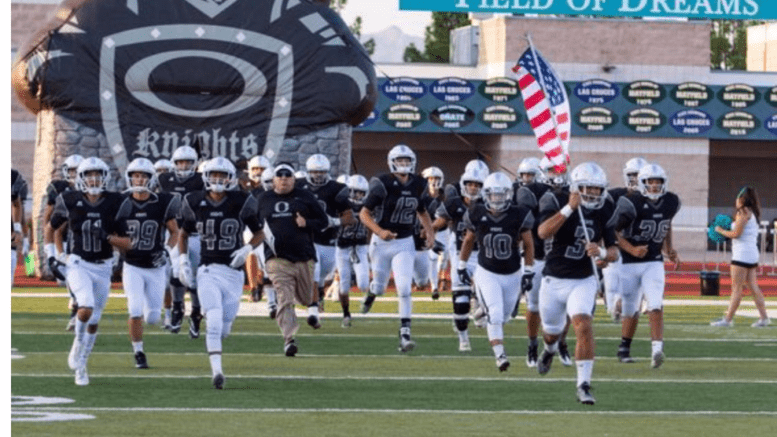 The last time I started a season 0-3 was in 1994 when I was a freshman coach at El Paso Riverside in Texas. I was a bright-eyed, cocky 22 year old who thought he knew it all. But, after 9 games, when the season mercifully ended, I was a dejected, droopy eyed, humble 22-year old that just finished his first season 0-8-1. Welcome to high school coaching, baby!

The reason I opened up with that little tidbit, is because my Oñate Knights have started the 2017 campaign 0-3. We lost again on Saturday 59-35. A loss is never acceptable and I never look for moral victories, but when building a program up, sometimes you have to.

We finally broke-out offensively with 35 points and just over 600 yards. Amazingly enough, we actually out-gained our opponent. Our quarterback, Aaron Sanchez, threw for 424 yards on the day, which eclipsed his 2016 season total in one game. He now has 911 yards in three games. My son Brandon Veliz, chipped in with 11 catches for 169 yards. He is the #6 receiver in New Mexico. Finally, our only D-1 kid, Monroe Young, had 4 catches for 159 yards and 2 scores.

I’ve heard people say in the past “stats are for losers.” I retort with “losing is for losers; stats are freaking great!” It’s a barometer of where you are and where you need to go, as an offense or defense.

Speaking of defense, we are still struggling quite a bit. Three seniors starting on that side of the ball and a lot of young-uns trying to figure stuff out. But, like I keep saying in all my post-game interviews with local newspapers, “we will get there; and when we do, it’s going to be spectacular.” We get to try it again this Saturday against the defending New Mexico state champions, Rio Rancho Rams. I could not be more excited and fired up; and my boys feel the same way!

It was Ralph Waldo Emerson who once said, “Men succeed when they realize that their failures are the preparation for their victories.” Now that has to be a first: a football coach on a football website quoting Emerson! But, I digress. After our afternoon weight room session I told our team Monday that real growth in life has to come through adversity.

We do not learn anything and we will not grow as men, if we do not encounter tough times. It is not just true in football, it is true in life. Paying your dues, taking your lumps, working your way up are all concepts that sometimes seem lost on Americans nowadays.

We live in a “right now” type of culture that is poisoning our kids. Sometimes they need to understand that not everything works out the way you thought it would, but working your butt off to get to where you want to be will always pay off. Whether they have a tough home life or are struggling in the classroom or something else may be hindering you, they need to understand the tough times don’t last, tough people do. I told them that winning games and winning titles is even sweeter when you have tasted the bottom first.

The beauty of coaching these kids is that they have absorbed every word. They show-up every day; and they know in their hearts that we WILL turn things around. They understand that these losses are all bumps in road on a destination to greatness.

There will be no pushing of a panic button in this program, I do not even know what that looks like. My staff, my players, and myself show-up for work every single day, never ever point fingers, never ever assess blame, and continue to work towards our goals. I love this place and I love these kids. We will get there, and when we do, it’s going to be spectacular!!

Until next time: BUY IN-SELL OUT & SWING YOUR SWORD