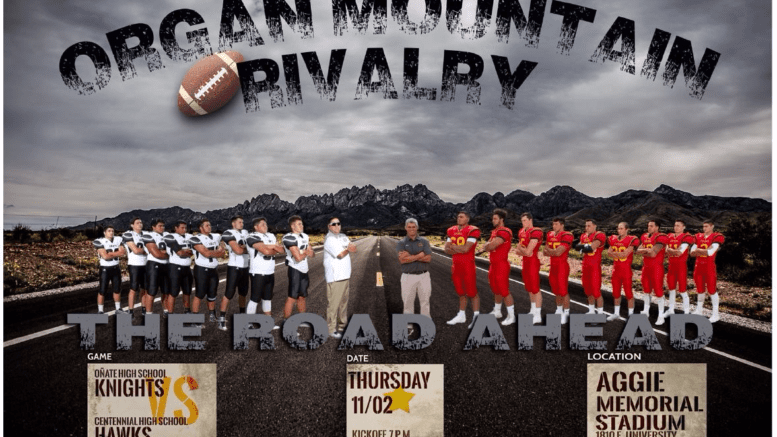 Miami vs. Florida State. Ohio St. vs. Michigan. Auburn vs. Alabama. Oñate vs. Centennial. Ok, ok, the last one is not as big as the first three on a national scale but in my mind, it is bigger!

Rivalry week is here in Las Cruces, New Mexico, and it kicks off with the “Organ Mountain Rivalry” Thursday night. We take on the Centennial Hawks at 7pm and for the first time ever, it will take place in Aggie Memorial Stadium, home of the New Mexico State football team. Parents from the other two high schools in town were not too thrilled with the prospect of the two of us playing at the same stadium and “infringing on their cherished tradition” but I could not care less. To me it is about our players and Centennial’s players getting the same opportunity to play in such a stadium. In the past, the other two schools in town got the luxury of playing at Aggie Memorial while Oñate and Centennial played at the Field of Dreams, which is the regular home stadium of the four of us.  Now, those other schools have great tradition and draw big crowds, so they need to move to a bigger venue, but for the life of me, when I arrived here I just could not understand why we could not be afforded the same opportunity. They keep their tradition with no interference from us, but let us start our own also. I have always had a lot of respect for those other two programs and I hope their game this Friday night is great; but it is time for the Knights and Hawks to start our own tradition.

It has been an up and down season for us, but that was to be expected. There are always many obstacles and hurdles along the way when building a program. We started out 0-4, won two straight, dropped a heartbreaker we should have won, then got hammered in our last two outings by the district’s top two teams. However, with all that, we are still going into our final week in the playoff conversation. A win gives us a 3-3 district mark, a 2-1 mark versus Las Cruces schools, a third place district finish, the first win over Centennial in school history (even though they have only been open a few years), and finally an outside chance at making the #12 and final seed in the New Mexico state playoffs.

Certainly much to play for, and our kids know it. They showed up Monday morning with a renewed energy and a sense of purpose. There was no moping, pouting, or feeling sorry for ourselves because of our overall record. Instead, the boys practiced like we were 9-0. What more could a coach ask for? I think we have changed the culture here and the future is certainly bright. A win against Centennial would be the springboard to a great 2018, if we are not selected for the playoffs, and would definitely show the direction our program is headed in. It will not be easy however. Our starting QB, got a concussion last week, so we’re going into battle with a back-up and a secret weapon people will be shocked at. More on that next week. But, their top two QB’s are out as well, as both suffered injuries in their last game.

Obviously, a defensive battle is to be expected but you never know. Centennial is a solid, well coached football team, who will be ready to play as well. They are 4-5 overall, but a win against us pretty much guarantees them a playoff spot. I expect nothing but a great, hard effort from them for four quarters. Regardless of what transpires tomorrow night, I think both of us have already won a major battle by fighting for our rights to play our rivalry game at NMSU’s stadium. Should be a fun one. May the better team (and better back up QB) win!

A New Era: Our First Win