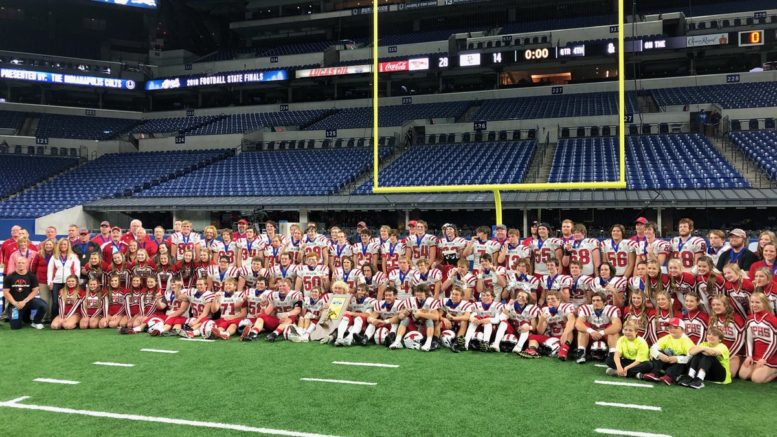 A 14-point outburst during the final 44 seconds of the first half proved decisive for New Palestine in its 28-14 victory over Decatur Central in the Class 5A state championship game.

Decatur Central, making its first-ever state finals appearance, cut the Dragons’ lead to 14-6 late in the second quarter before Colby Jenkins hauled in a 30-yard touchdown pass from Zach Neligh with :44 left in the first half.

Kyle Ralph on the hot start for the Dragons: "Our kids just keep playing hard. When you play hard like that consistently, good things are going to happen for you." @NPHSDragons pic.twitter.com/lS3R4NEn2r

After an interception ended DC’s next drive, Charlie Spegal scored on a 27-yard run on the final play of the half to send the Dragons into the intermission with a 28-6 lead.

The win gives New Palestine (14-0) its second state title to go with the trophy won in Class 4A in 2014 —  also under head coach Kyle Ralph, who now sports a 74-4 record in six seasons. Ironically, the 28 points scored marked a season low for the Dragons, who came in averaging 58.5 points per game and scored at least 60 points seven times.

Neligh opened the scoring by running in from 20 yards out on the final play of the first quarter. Spegal then added a 2-yard run early in the second quarter. Spegal ran for 228 yards on 27 carries in the game and finished with 3,358 yards and a single season state record 68 touchdowns on the season.

Most Penalty Yards
101 yards by Decatur Central vs. New Palestine

Luke is a linebacker for the Dragons and has registered 85 tackles, 6 tackles for a loss, and 3 sacks on the season. He has been named All-Hoosier Heritage Conference for three straight years and was chosen to the All-State Team as a sophomore. He has been an integral part of the New Palestine defense for the past four seasons and has a career record of 45-3 with the team. Luke is also a four-year member of the New Palestine track and field team.

Luke ranks 7th in his senior class of 288 students academically with a GPA of 4.1 and is a member of the Academic A Team at New Pal. He is a member of Student Council for Athletic Leadership, Best Buddies, National Honor Society, and Science Honor Society. He also spends time volunteering in his community through Camp Fuel and Camp Ability, which are athletic camps for students and youth with disabilities. He also piloted the Snuggles and Snacks project at New Pal, where a group made blankets for the homeless and donated food to the Ronald McDonald House. He has also volunteered at Hancock County Hope House, Warner’s Haunted House, Brandywine Elementary Bonanza, and has volunteered with Unified Track athletes in New Pal. Making an impact on others is something that Luke has taken pride in.

Luke is the son of Ken and Kristin Ely of New Palestine, IN. He is undecided on his college choice at this time.

Each year the IHSAA Executive Committee selects a senior player who was nominated by his principal and coach and was determined to have best demonstrated mental attitude, scholarship, leadership, and athletic ability. The award is named in honor of the IHSAA’s third commissioner from 1962-76.

The Indianapolis Colts presented a $1,000 scholarship to New Palestine High School in the name of Luke Ely. The Colts have been the presenting sponsor of the entire football state tournament since 2009 and are sponsoring the Phil N. Eskew Mental Attitude Award.