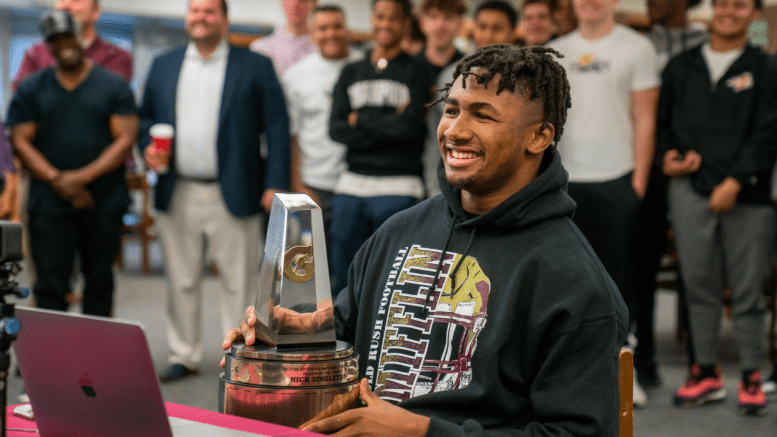 Governor Mifflin running back Nick Singleton is celebrating being named the 2021 Gatorade National Football Player of the Year. New York Giants running back Saquon Barkley virtually surprised Singleton with the news, while his family, coaches and teammates showed up with the trophy at the Shillington, Pennsylvania school on Tuesday.

Singleton, who will play his college football at Penn State, was one of three finalists for the award. The other finalists were quarterback Cade Klubnik of Westlake (Texas) and wide receiver/defensive back Tetairoa McMillan of Servite (California).

Singleton, a 6-foot, 215-pound senior running back, rushed for 2,043 yards and 41 touchdowns on 165 carries this past season, leading the Mustangs (10-1) to the district championship game. Singleton also caught four passes for 98 yards and two touchdowns, and returned a kickoff for another score. An All-State honoree, he has been selected to play in the 2022 All-American Bowl. Singleton is ranked as the nation’s No. 1 running back recruit in the Class of 2022 by 247Sports. He averaged 13.2 yards per touch in 2021 and scored every 3.89 touches.

HUGE, HUGE congrats to Nick Singleton who was named the Gatorade NATIONAL football player of the year! pic.twitter.com/ljbpP2o286

Singleton has volunteered extensively as a coach for Bronco’s “Little Kids” football camps and practices. He is an avid participant in Mifflin’s elementary school literacy outreach program and has donated his time as part of community cleanup initiatives.

Singleton has maintained a 3.51 GPA in the classroom.

The award, which recognizes not only outstanding athletic excellence, but also high standards of academic achievement and exemplary character demonstrated on and off the field, distinguishes Singleton as the nation’s best high school football player. The Gatorade Player of the Year Selection Committee, which leverages experts including coaches, scouts, media and others to evaluate candidates, selected Singleton from more than one million other student-athletes who play high school football nationwide.

Competition for the national award was fierce. Singleton topped the list of state winners in football who collectively boast an incredible list of accomplishments, including 34 with signed National Letters of Intent to play football at Division I colleges/universities, 36 who have volunteered for two or more organizations and 36 with a GPA of 3.5 and above.

“Nick Singleton has every single desirable trait at the running position,” said Steve Wiltfong, Director of Football Recruiting for 247Sports. “His combination of size, elite speed, elusiveness and power is rare. There’s a reason he’s our top-ranked prospect at the position. He has the ability to get tough yards and also hit the home run. He’s the type of athlete who could win the 100-meter dash and the shot put in the same track meet. Nick is mature, focused, hard-working and also has all the attributes coaches covet as a student and leader. Tangibles. Intangibles. This young man has it all.”

“There’s a reason the Gatorade Player of the Year award is the most prestigious award in high school sports,” said Gatorade Senior Vice President and General Manager Brett O’Brien. “Winners have to be just as impressive on the field as they are in the classroom and in their community, so it’s no surprise Nick Singleton has earned this honor as he continues to go above and beyond in all three pillars of the award.”

Past Gatorade National Football Player of the Year award winners have won six NFL MVP awards and appeared in 31 Pro Bowls. Six winners have been taken in the first round of the NFL Draft and two have been enshrined in the Pro Football Hall of Fame.