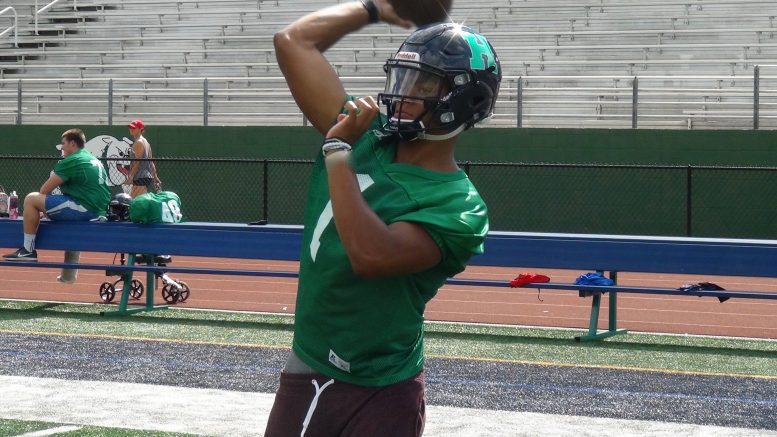 Justin Fields of Harrison (Georgia) is the No. 1 dual-threat QB in nation.

It’s been quite a ride for Justin Fields of Harrison (Kennesaw, GA), who has gone from not having any college scholarship offers in April 2016 to now being the No. 1 dual-threat quarterback in the nation.

I caught-up with Fields on Friday afternoon during his team’s practice to talk about the upcoming season, which finds the Hoyas ranked No. 86 in the High School Football America Preseason Top 100, plus we also talked about the hoopla surrounding his upcoming college choice.

Fields, who is a 5-star recruit with over 40 offers, told me that he’s getting close to a decision, but wouldn’t reveal, which team his leaning toward. Fields, who was the Elite 11 MVP at The Opening, has narrowed his choices to Georgia, Auburn, Florida, Florida State and Penn State.  In June, Fields, who originally gave his verbal commitment to Penn State, re-opened his recruitment.

You can listen to my interview with Fields below:

Last season, Fields completed over 66 percent of his passes for 2,770 yards and 23 touchdowns with only six interceptions, according to Harrison’s stats. He also ran for 1,176 yards and 15 TD’s.