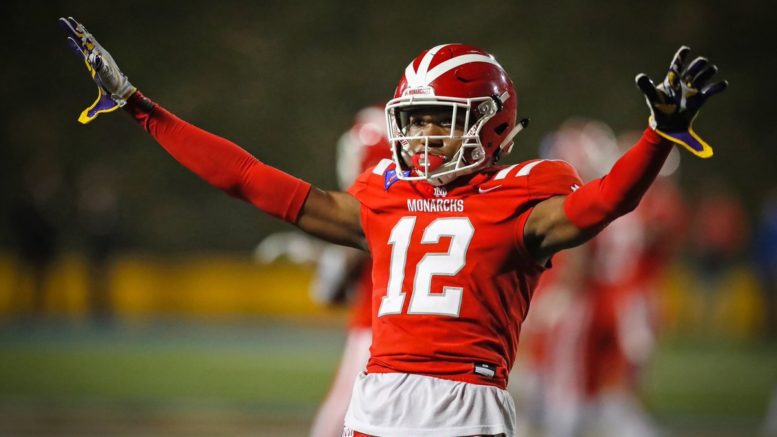 No. 1 Mater Dei’s path to a second straight High School Football America “mythical” national championship is a little bit clearer after beating No. 5 IMG Academy 28-24 on Friday night before an overflow crowd in Santa Ana, California. It was a game that saw the Monarchs come back from a couple of deficits and overcome 155 yards in penalties.

IMG, which saw its 40-game win streak come to an end, took a 7-0 lead in the 2nd quarter and held a 7-6 advantage at the half. Mater Dei grabbed its first lead in the third quarter on a flea flicker that started with junior quarterback Bryce Young handing the ball to Shakobe Harper, who gave it to Bru McCoy, who gave it back Young, who found Sean Dollars wide open for the score. The two-point conversion gave the Monarchs a 14-7 lead.

Mater Dei won it with a little more than a minute to go on a touchdown run by Young, who’s given his verbal commitment to USC.

Young finished the game 21 of 30 for 309 yards with three touchdown passes.

Mater Dei, which now owns a 20-game win streak, opens Trinity League play next week against Servite, which is a rivalry game for the Monarchs. Our latest national rankings find Mater Dei and three other Trinity League teams ranked in the Top 100 — St. John Bosco at No. 4, Orange Lutheran at No. 29 and JSerra at No. 76.

“That was 48 minutes of great ball”

“This settles the beef between California vs. Florida ball.”@buhbuhbru and @MDFootball just made a national statement pic.twitter.com/sA20W1TkpU

This will be the last time that IMG, which can recruit players from around the nation, will play a team from California, because the state has decided to ban such matchups.