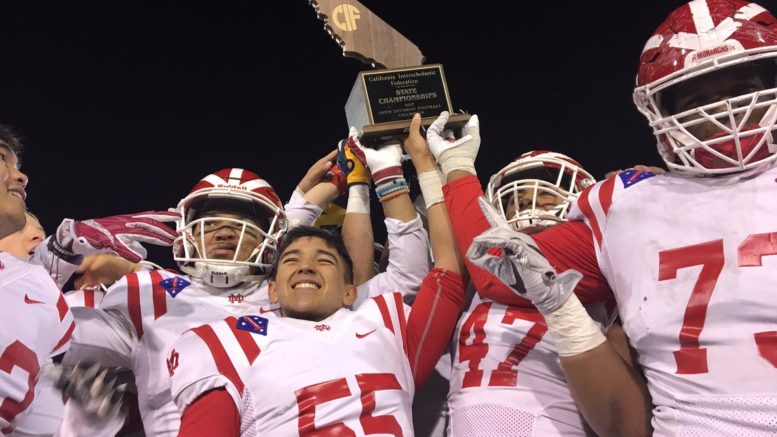 The win not only gave Mater Dei (15-0) its first-ever state championship, but it also wraps-up the High School Football America 2017 “mythical” national championship that is based on our proprietary algorithm with one more week of football to play.  The Monarchs entered the game ranked No. 1 in the High School Football America Top 100, while De La Salle was ranked No. 11.

Mater Dei jumped-out to a 21-0 nothing first quarter lead and never looked back.

Once again, junior quarterback JT Daniels and Amon-Ra St. Brown were at the center of the team’s high-powered offense. Daniels, a USC-recruit, completed 20 of 30 passes for 233 yards and three touchdowns. He also ran for two scores. St. Brown caught eight of Daniels’ passes for 137 yards and two touchdowns to close-out an incredible career with Mater Dei that includes 44 touchdown catches.

The next-to-last High School Football America Top 100 will be released Sunday afternoon with our final rankings released on December 24.