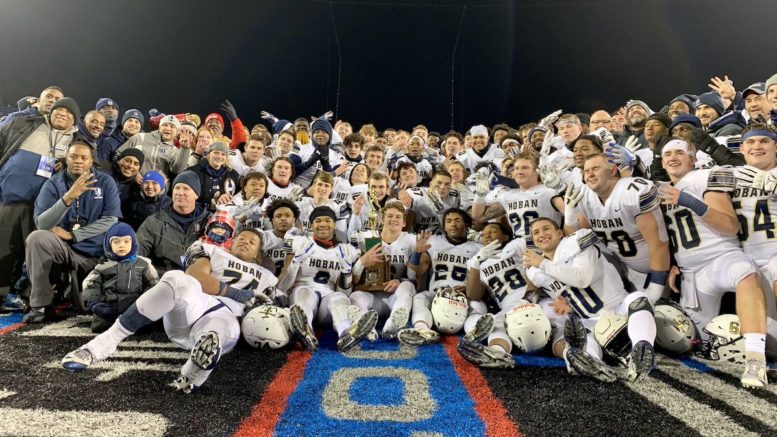 For the seniors in the Archbishop Hoban football program, the last four years have ended the same way…with an Ohio state championship. Thursday night, the Knights, ranked No. 12 in the latest High School Football America 100 national rankings, beat No. 63 Massillon Washington 42-28 at Tom Benson Hall of Fame Stadium before 16,213 fans for the school’s fourth straight state title.

Hoban raced out to a 34-7 halftime lead, but the Tigers made a game of it in the second half by scoring 21 unanswered points to close the gap to 34-28 in the fourth quarter. The Knights sealed the title and their 29th straight win on a a two-yard run by junior running back DeaMonte Trayanum.

#OHSAA FB D2: Hoban makes it 20-0 early in the second quarter. Shane Hamm gets his second TD of the game on a 1-yard run.

#OHSAA FB D2: Massillon cuts the Hoban lead to 13! Kyshad Mack with the one-yard TD run to make it 34-21 with 56 seconds left in the third quarter. pic.twitter.com/u4usUUvFvX

#OHSAA FB D2: Hoban pushes its lead back up to 14 with a 2-yard touchdown run from DeaMonte Trayanum and successful 2-point conversion! 42-28 with 4:43 left in the game. pic.twitter.com/ql1uxY9wXI

Running back Tyris Dickerson was the star on offense, rushing for 211 yards .

This is the first time that Hoban has ever finished 15-0.

No. 1 North Shore and No. 26 Denton Ryan pick-up Thursday night wins in Texas

No. 24 Northwestern uses strong defense to beat No. 71 Palmetto in Miami battle of Top 100 teams