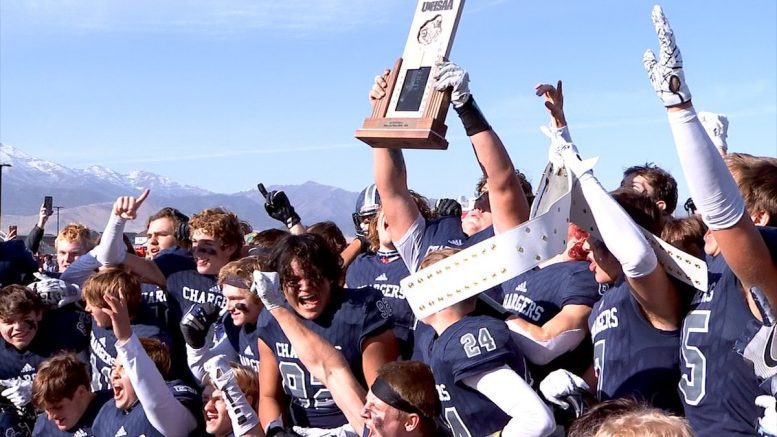 For the third straight year, Corner Canyon is a Utah high school football state champ. The Chargers, ranked No. 15 in the High School Football America 100 powered by BlackMP Living Water, rolled by No. 82 Lone Peak 45-7 on Friday to capture Utah’s 6A state championship.

Senior quarterback Jaxson Dart closed-out his scholastic career throwing for four touchdown passes and running for another. Dart finishes the season with 67 touchdown passes, which is a single-season record in the state.

One drive, one TD for Corner Canyon and star 2021 QB (and #USC target) @JaxsonDart in the Utah 6A state championship game. (@alecsimpson5 providing an extra angle). @rivals @adamgorney pic.twitter.com/gssAP6vduq

#USC QB target Jaxson Dart making things happen with his legs for a 17-yard score. Already has 2 TDs. One on the ground, one in the air. ⁦@RyanYoungRivals⁩ ⁦@USC_Rivals⁩ pic.twitter.com/xtuAREts4g

Corner Canyon’s first title in 2018 was in Class 5A, while the last two have been in 6A, the state’s largest classification. The win stretches CC’s win streak to 40 straight.

Former Utah high school football player suing school district and state governing body after coach told him to “man up” after a concussion.