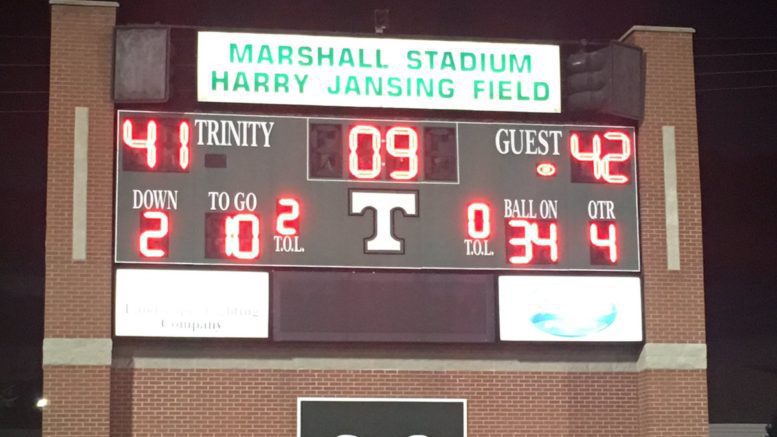 One of the nation’s top wide receivers brought his A-game to the national television spotlight, and at the most crucial time.

David Bell, a four-star recruit for No. 20 Warren Central (Indianapolis), capped a wild comeback for the Warriors when he caught a 28-yard touchdown pass from Jayden George with 1:08 remaining in a wild, 42-41 win over Trinity (Louisville, Ky.). The game was broadcast on ESPNU.

Warren Central avenged last year’s loss to Trinity, which coincidentally was also by a 42-41 score. Southern Illinois commit Romeir Elliott had a big game on the ground, running for 233 yards and two touchdowns while catching three balls for 37 yards and a score in the comeback win.

Bell, who is the No. 2 player in Indiana and the No. 22 wide receiver in his class nationally per the 247 Sports Composite, finished the night with five catches for 123 yards and two TDs. He currently has 18 FBS offers, including 10 Big Ten schools (only missing Maryland and Rutgers) as well as Notre Dame and others.

Friday night, he certainly left an impression on recruiters and commentators alike.

David Bell has a chance to be Warren Central’s GOAT. What a clutch, high-character performance by the senior receiver. He blocked, he made the clutch plays. Our RB Elliott is terrific too. Great kids. Great game. Great victory. #DubC

FOX Sports One commentator Jason Whitlock is a former Warren East lineman, where he blocked for eventual NFL No. 1 pick Jeff George in the 1980s. And it is Jeff George’s son who is under center for the Warriors and tossed the winning score to Bell.

As for Bell, his recruitment will only pick up after big-game, big-stage performances like Friday night’s.

No. 87 Hewitt-Trussville with statement win over No. 24 Hoover in Alabama high school football showdown