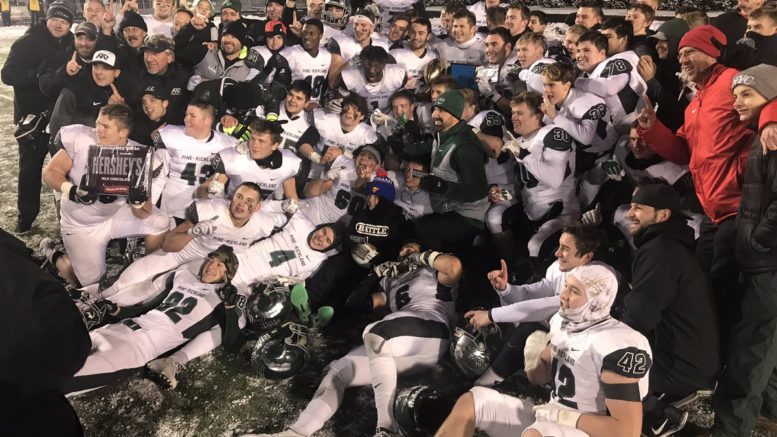 For the first time ever, the Pine-Richland high school football program can call itself Pennsylvania high school football champs.  The Rams, ranked No. 20 in the High School Football America Top 100, beat No. 7 St. Joseph’s Prep 41-21 to capture the state’s 6A title.  Coming into the game, SJP had won three of the last four state titles in Pennsylvania’s largest classification.

After taking a 14-7 halftime lead against the Hawks and their 27 game win streak, P-R put the game out of reach in the third quarter behind Notre Dame-recruit  Phil Jurkovec, who was 15 of 27 for 200 yards and one touchdown, while rushing for 88 yards on 20 carries and four touchdowns. Jurkovec finishes his career with 11,157 yards in total offense.

Jurkovec buys time and hits Ben Jochem for the score! @PRRamsFootball move out to a 35-14 advantage over @SJPrep_Sports 2:07 Qtr 3 up and down we go! @EPAFootball @HSFBamerica pic.twitter.com/wGUASzqhBl

There are no words to describe Championship Week in Hershey. Just feel the emotion in this picture. Thanks @WPAFootball @EPAFootball for the chance…… pic.twitter.com/tWg6pK5E1H