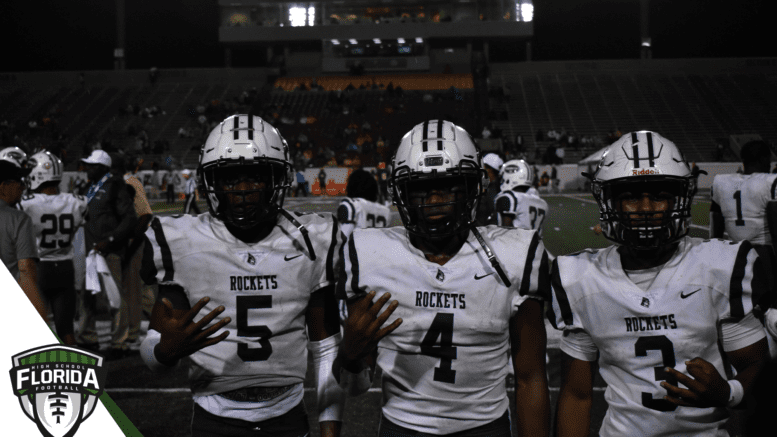 From left to right: No. 5 Kejon Owens, No. 4 Amari Daniels, and No. 3 Juan Henry all rushed for over 100 yards in the Class 6A State Championship Game on Thursday, December 12, 2019 at Daytona Stadium in Daytona Beach, Fla. [PHOTO: Joshua Wilson/FHSF]

Miami Central, ranked No. 29 in the High School Football America 100 national rankings, rolled to its sixth overall state high school football championship with a 62-27 win over Escambia in the Florida 6A championship game.

Read a game recap below from our friends at FloridaHSFootball.com.

DAYTONA BEACH, Fla. – 2019 has become the year that records were meant to be broken.

The trend of what was broken in a day or last week has also become the trend of record-breaking as of late.

After Blountstown record-breaking performance of 458 rushing yards by a team in a State Championship Game in a losing effort in the Class 1A game this past Saturday, the Miami Central Rockets told the entire state they could do one better – and one that might hold in the record books for – on Thursday night at Daytona Stadium in the 2019 FHSAA Class 6A State Championship game.Advertisement

Miami Central (12-3) turned in one of the best rushing performances by a team in any game this season with three running back eclipsing the 100-yard mark that was the trademark of carrying the team to their sixth overall state championship, which has all come in this decade.

It also marked the first time that the Rockets have won the state championship since 2015.

The game got rolling with Escambia (14-1) having the ball first, which ended with a three-and-out.

And that is when things started getting out of hand quickly.

On the first play from scrimmage for the Rockets, it became the start of the Amari Daniels show when he blasted off down the sideline for 76 yards to get the Rockets up 7-0.

And it got worse quickly for Escambia when AV Smith fumbled the ball away which was forced by Yulkeith Brown.

After the fumble recovery, it only took four plays when Daniels found the end zone again on a 27-yard carry down the sideline to get the Rockets up 14-0.

Escambia thought it would catch a break after forcing Daniels to fumble on the first play of the Rockets’ third drive, but it would be all for not when Escambia couldn’t convert on third down at the Rockets 38 after AV Smith completed a pass to DT Gideon from 50 yards out.

Daniels would cash in on his third touchdown of the four he scored on the night with 2:14 left in the first quarter that capped a 90-yard touchdown when he scored from six yards out to put the Rockets up 21-0 on the Gators.

It would only be the end of the first quarter before Escambia would finally find their way to end zone which was helped on a 69-yard pass from Smith to Gideon that lead to a 4-yard touchdown by Frank Peasant with 1:28 left in the quarter.

However, any glimmer of hope of trying to get back into the game for the Gators – despite two more touchdowns – was lost in the second quarter when the Rockets put up three more touchdowns up on the Gators when Kejon Owens scored two of the touchdowns from four and one yards out while Katravis Marsh found Yulkeith Brown from 30 yards for the Rockets’ first passing touchdown of the night.

With all the scoring, the Rockets took at decisive 41-19 lead into the locker room at the half.

Escambia would find the first score of the half which would turn out to be the last score of the game when the Gators stopped the Rockets on a fourth-down play that gave them great field position at the 15-yard line. That drive was capped off quickly in two plays when Peasant walked right into the end zone after a hard-fought 14-yards that would be capped off with a two-point conversion to make the score 41-27.

After that it was all Rockets when Daniels would find his fourth touchdown on the next drive for Miami Central, scoring from 29 yards out and making the score 48-27.

The Rockets would score two more times with Katravis Marsh scoring from 15 yards out and Owens adding his third touchdown to bring the final score 62-27 on the night.

On Owens 38-yard touchdown run, the Rockets broke the team rushing record of 453 yards as Miami Central would see the team finish with a total of 498 net rushing yards.

With all the yards rushing, Daniels finished with 188 yards on 16 carries while Owens had 10 carries for 165 yards. Juan Henry also broke the 100-yard rushing mark with 12 carries for 116 yards despite the fact of never finding the end zone during the game.

With the sixth state championship in hand, the Rockets were feeling proud and head coach Roland Smith was certainly proud of the effort his team turned in especially with his running backs.

“When you come to Miami Central to play running back in our program you got to be an unselfish guy because we have some top backs in our program. This is what we do. We tell them if you come in our program, you won’t be banged up. Our goal year-to-year is to win a state championship and a national championship. Those guys were just fresh tonight because they were unselfish throughout the season and came out here and put on a performance,” Smith said.

As for playing Escambia, Miami Central had a lot of respect for them despite the drubbing.

“Escambia is a great program. It’s Emmitt Smith’s high school. We have a lot of respect for what they do and they have some good players,” Smith said.